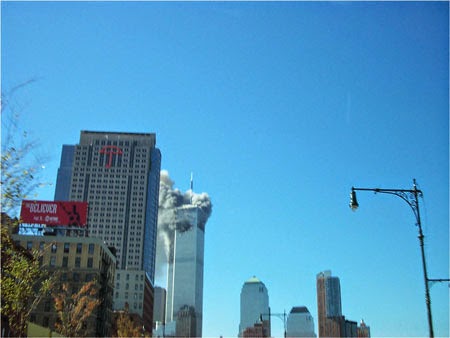 Every year on September 11 we reflect on that fateful day in 2001 and on the trying weeks, months and years that followed. We do so to honor those we lost, to comfort those still grieving and to thank those who gave of themselves to help us heal.

Just as our nation was forever changed, so was the Red Cross. Our organization’s relief effort—in New York City, Washington, D.C., and Shanksville, Pa.— was one of the largest in our organization’s history. The response continued for years after the attacks and involved more than 57,000 volunteers and employees from across the country.

No one place was affected as profoundly as our great city and no Red Cross chapter was as deeply impacted than Greater New York; we were at the epicenter of the relief effort. Within moments of the first plane striking the North Tower, teams of Greater Red Cross staff sprang into action to help.

Here is their story:

Minutes after the first plane struck the North Tower, Greater New York Senior Director of Emergency Services Virginia Mewborn and Assistant Director of Operations Max Green left the chapter’s headquarters on Amsterdam Avenue in Manhattan to respond to what they then thought was a small plane hitting the World Trade Center.

Green and Mewborn were planning to evaluate the situation to see how the Red Cross could best support emergency personnel at the scene. On the drive down, Green said he felt that if the building were evacuated early, “…it would have been a long-term canteen operation, where we would support emergency workers.”

As they drove, Virginia paged Red Cross Field Operations Supervisor Luis Avila and asked him to join them. Avila, who was in Queens that morning working a second job, could see the smoke from the North Tower from his location. He told his boss he was leaving, and in fact, never returned to that job. As he left, Avila watched in disbelief as the second plane banked and hit the South Tower.

Mewborn and Green, in their car, began to realize that they had not understood the scope of this incident. “As you got onto the West Side Highway you could see the smoke,” said Green. “My heart fluttered. I looked up at it, saying ‘This, this looks a lot bigger than what I thought it was.’” 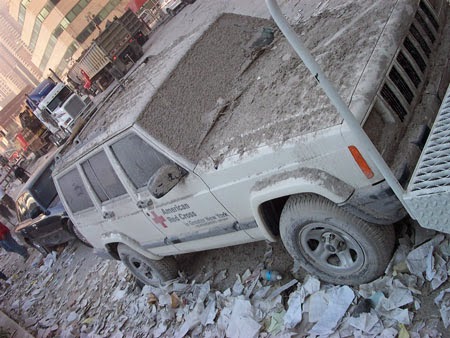 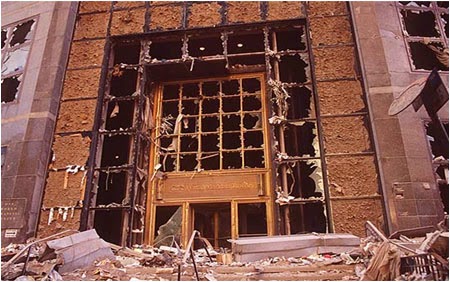 The two parked on West Street, south of Chambers and walked towards the World Financial Center (WFC). They hoped to find a command group—people from partner agencies like the Office of Emergency Management (OEM), who would be coordinating this disaster response with the Red Cross.

Because her cell phone wasn’t working, Mewborn borrowed a phone at a shoe repair store to call headquarters. Greater NY Red Cross CEO Bob Bender told her four things: a second plane had hit, they were dealing with a terrorist attack, Red Cross would set up a Respite Center downtown for survivors and first responders, and he’d sent an Emergency Response Vehicle (ERV) down with a Red Cross disaster responder, Kemagne Theagne, to meet them.

Mewborn and Green found a command post on West Street, right across from the Twin Towers. That’s when they saw a horrific sight—people jumping from the upper stories of the Trade Center. They decided they should not get closer; they should in fact return to the chapter to organize the Red Cross response from there.

Meanwhile, Avila had arrived in lower Manhattan and parked on West and Vesey. “When we get to a scene,” he said, “the first person with a vehicle tries to get as close as they can.” He continued on foot to 7 World Trade, where OEM’s offices were located. “I saw debris everywhere, I was wading through rubble,” he said. As he began to follow a group of fire chiefs, the “haunting scenes” around him convinced Avila he should leave. He turned right to regroup with Green and Mewborn, and the first responders turned left, towards the Towers. Avila later learned they had perished.

As Avila approached the WFC he saw Mewborn and Green, and they walked inside together. “We made a deal that we were going to stay together from that point on,” he said, “that we were going to take care of one another.” Avila was able to contact his wife and let her know he was alright, then the line went dead. “What felt like an earthquake” shook the building. It was the North Tower coming down, but they didn’t know that. They thought the WFC was collapsing on top of them. Suddenly, the building’s windows exploded. Avila grabbed Mewborn and Green. They ran, along with hundreds of others, to the West Side Highway, zigzagging their way back to Green’s car.

Meanwhile, Kemagne Theagne, who had rushed down from chapter headquarters in an ERV, was on Church Street, directly in front of the Towers, trying to find the Red Cross staging area for the relief operation he believed Mewborn, Green and Avila were mounting. He had just gotten out of the ERV to help a woman who had fallen, when he heard, “Pop, pop, pop, pop, pop.” He looked up and saw the North Tower coming down, floor by floor. “I just froze; I couldn't believe this was happening.”

As people ran out of the lobby towards Theagne, a man grabbed him. The two ran together, holding one another, towards a staircase leading into a subway station with a locked gate. They were now engulfed by choking soot and debris. Theagne tried calling his three colleagues, but his Nextel radio was dead. He said to himself, “I hope, I hope, I hope they made it.”

His colleagues were on their way back to HQ. As they drove, they spotted a man in Red Cross gear they thought was Theagne. They stopped and pulled him into the car, only to realize that it was responder Barry Crumbley, who had traveled to the site on his own to find his wife, who worked in one of the Towers. (She made it out safely.)

Theagne spent the next 45 minutes at the foot of the staircase, “just waiting,” trying to breathe, until he saw some light trying to break through the smoke. “We used that little bit of sunlight to guide us out.” They climbed up the stairs and ran.

After washing himself off at a nearby deli along with dozens of others, Theagne made his way back to the ERV. “I said to myself, ‘I got to get this vehicle out of here.’” He slowly made his way out of the site in the dust-covered ERV, “driving through the spider web what was the windshield.” When he finally arrived uptown, covered in dust and ash, no one could believe he had brought the ERV back.

Mewborn, Green and Avila had already returned, also covered in soot from head to toe. “I don't know if [our colleagues] thought we were dead or they were seeing a ghost,” said Avila. “All I remember saying is give me water… I drank about two liters as quick as I could.”

After giving themselves a few moments to wash up and regroup, they remobilized with the rest of the Red Cross team. “After we realized everybody was okay, we needed to make sure that we had supplies down there,” said Avila. 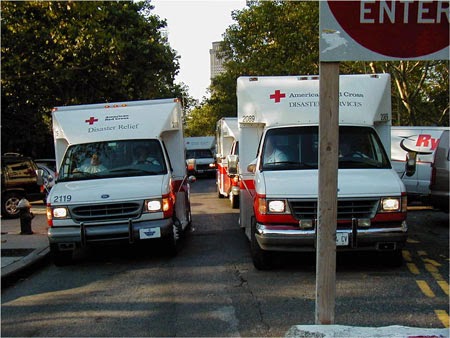 They needed to get the canteen trucks (the ERVs), down to the site as quickly as possible to replenish the water for the survivors, firefighters and other emergency personnel. “Preparations had already begun when we were downtown,” Avila said, “but whatever needed to be finished we continued to do.”

That included creating a plan to send caseworkers to Penn Station, Grand Central Station and the Port Authority, to position ERVs on the West Side Highway and the FDR Drive, and to get ready to set up a relief operation at the Brooklyn Chapter.

“In those first 12, 24, 36, 48 hours,” Mewborn said, “we registered thousands of volunteers and provided service to thousands of people in New York. We did it well, and we started the platform of how we were going to move forward.”

Posted by nyredcross at 7:00 AM