Without the Red Cross, I don’t know where I would be. 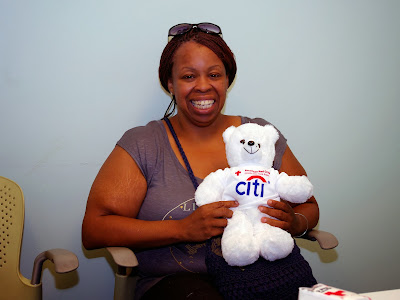 For Bedford-Stuyvesant native Halzian Owen, one tragedy was followed by another.

Just a week after her husband passed away, a devastating act of arson destroyed her quiet building and her family-owned apartment.

Owen recalled, “I saw and smelt smoke, but I didn’t see flames. I just reached for the door handle; it was hot to the touch.”

With no other escape route available, Owen, her 2-year-old son, Derrick, and her 16-year-old niece decided to jump out of the second-story apartment’s back window.

Firefighters arrived to put out the fire and helped Owen rescue her dogs, Brownie and Prince. Soon after, a Red Cross van arrived at the scene and a responder assisted the family.

Owen said, “She made sure we were okay ... it was comforting.”

Red Cross also extended help to Owen’s neighbors, giving them temporary housing and emergency funds. Owen declined housing, and her family stayed with her son’s godparents; however, she accepted financial assistance from the Red Cross, which allowed her to buy food and clothing.

For Owen, experiencing an apartment fire firsthand was surreal. “I could not believe it,” she explained. “You see it on TV, but you never truly understand until you live through it.”

As for the next step, Owen plans to visit the NYC Department of Housing Preservation and Development, as well as Crime Victim Services.

She said, “There are a lot of services available. The Red Cross gave me referrals that I wouldn’t have ever known about.”

“Without the Red Cross, I don’t know where I would be,” Owen added. “I would be lost. They were there for me and my family, and I am really thankful for that.”

Posted by nyredcross at 2:45 PM

Email ThisBlogThis!Share to TwitterShare to FacebookShare to Pinterest
Labels: Brooklyn, Disaster relief, Down the Street