Dennis Patrikios has been a volunteer at the Red Cross on Long Island for more than ten years. A few weeks ago Dennis deployed to Texas in response to the unprecedented flooding throughout the state. In our conversation with Dennis, he discusses his role in Austin and what it means for him to go on a deployment. 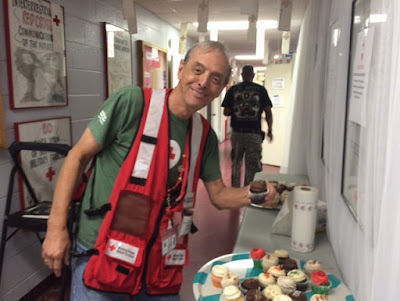 Can you talk about your role at the Red Cross?
I basically do whatever they need me to do. In a nutshell, I am a Shelter Manager and Supervisor, I'm a Disaster Action Team Captain, I’m an Emergency Response Vehicle driver, I teach CPR and First-Aid, I respond to local fires and disasters, I teach disaster classes and I do the installation of smoke alarms. I’m retired so they call me to do a lot.

Have you ever deployed outside of the Region for the Red Cross? If so, where?
I was in Galveston, Texas on my first deployment in 2008 for Hurricane Ike where I was part of the Emergency Response Vehicle team and did fixed and mobile feeding. A tropical storm [Isaac in 2012] brought me to Hattiesburg, Mississippi and Kendal, Louisiana. It’s happened to me twice that people we meet who are seeking help have actually become volunteers in their area – one in state and one out of state – because they saw what we did and they saw what it was all about. Before I actually left, they had gotten the paperwork and signed up.

What compelled you to deploy to Texas?
It’s what compels all Red Cross people to do what they do – they want to help. I got a call from the chapter asking if I was available, I said sure and I went to Texas. It’s a calling; something we all feel compelled to do. We sign up to do this job. We’re trained to see and do mostly everything we need to do on a job. There’s a need and we do it. The days are long, they’re tiring and they’re exhilarating because you know you’re doing the right thing to help somebody.
I think everybody should try to do it at least once, to go on a deployment, if you have the time and the opportunity arises. The people that you meet on a deployment, not just the staffers from the Red Cross but the people that are hurting, the people that need our help, are actually thrilled that we’re there. The thing they find amazing is that we leave our homes and go for a period of time to help out. That just fascinates them.

To see Dennis on the ground in Texas and learn more about the Red Cross response efforts there, click here.