"Without the Red Cross, I think we would be lost.”

After a five-alarm fire tore through the sixth floor of a 112-unit apartment complex in Elmhurst, Queens, Red Cross volunteers immediately responded to provide emergency relief to more than 300 affected residents including Kevin Rojas and his mother. 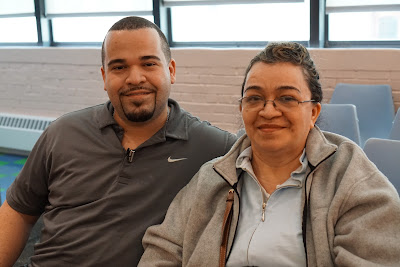 On April 11, 2017 Kevin Rojas was picking up his girlfriend to go see a movie when fire trucks raced by his car. When he turned onto his street, Rojas discovered with great anxiety that the fire trucks were headed to his own apartment complex.

“I was watching the fire happen before my eyes,” Rojas said. “It was like being in the movies.”

As his building burned, Rojas stood across the street in shock watching firefighters battle the blaze well into the night. He was so focused on the fire, he didn’t realize Red Cross volunteers had arrived on scene to assist those affected and displaced by the fire.

The Red Cross established a reception center and shelter at PS-13Q, a nearby school, and provided food, temporary housing, and other emergency relief services to the more than 300 residents affected by the fire. It was at the shelter that Rojas reconnected with many of his neighbors.

“They were there so quickly,” Rojas said.

The damage from the fire was extensive. The sixth floor was completely destroyed, and the fifth floor sustained severe smoke, water damage and mold. Rojas’ apartment was on the fifth floor.

“Everything was lost,” Rojas said. “We left everything behind.”

Along with meals for several days after the fire, Rojas turned to the Red Cross for emergency financial assistance for basic necessities.

As for housing, Rojas’ girlfriend lives a half a block away from his apartment, so he and his mother had a place to stay after the fire. They will continue to live there until they are able to return home in several months.

Over the years the apartment complex had grown into a tightly-knit community, with many of the neighbors having known each other for decades. Following the fire, they’ve stayed connected, offering each other support as they cope with the loss. Rojas, who has lived in the building for the past 30 years, adopted an informal leadership role among the tenants, advocating on their behalf to help ensure they’re receiving the assistance and information they need.

Two months after the fire, Rojas visited the Red Cross on behalf of his family and many of his neighbors, reconnecting with Red Cross caseworkers and inquiring about additional resources available to them, like gift cards provided by Stop and Shop and vouchers for furniture.

“It’s a blessing honestly… tremendous amount of help,” Rojas said. “Without the Red Cross, I think we would be lost.”

Posted by nyredcross at 5:24 PM