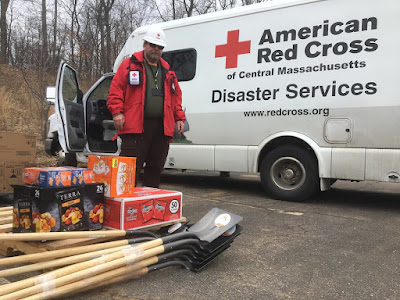 Over the past few weeks a series of Nor’Easters have hit the East Coast, slamming New England the hardest. To bolster the relief efforts of the American Red Cross in Massachusetts, several volunteers from our Greater New York chapters traveled to the area and offered their services.

The storms flooded coastal regions and left many across the area without shelter or power for an extended period of time. The Massachusetts Red Cross led efforts to open shelters, and sent out teams to deliver clean-up kits, food, supplies and support to those effected.

Among those lending a hand in New England was Vivian Moy, a volunteer from Long Island. Vivian deployed to Massachusetts for one week after answering an emergency request for shelter team members.

Vivian recently shared a few words about her work at a shelter in Cape Cod and about her efforts behind the scenes working at the operation’s headquarters in Medford, not too far from Boston. 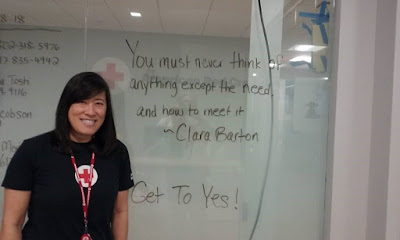 “I was surprised that the majority of shelter residents were elderly, so they needed a lot of attention. I would wake at 6:00 am and not lay my head back down until 10:00 or 11:00pm. The days were long but so worthwhile. I would sit with them and listen to their experience with the storm and their family stories…I’m always amazed at all the coordination that happens behind the scenes as we carry out our mission wherever a disaster occurs! It seemed like every time we turned around there were more power outages and hence more shelters needing to be opened and more people needing to be fed.”

To learn more about the work of the Red Cross in Massachusetts  visit, www.redcross.org/ma.
Posted by nyredcross at 2:22 PM