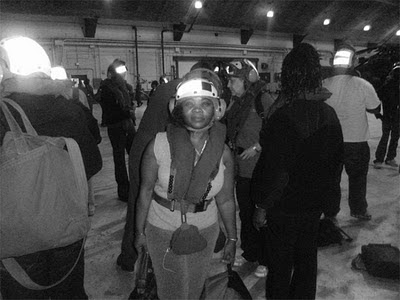 My journey back to my homeland, Haiti, came at a time when my people were at their worst. I had left as a 10-year-old child and had never been back. The American Red Cross opened a door for me to travel back to Haiti, and I accepted the opportunity with a heart full of grief. The earthquake left so many dead and so many survivors suffering from severe trauma—both physical and mental.

I am a licensed Master Social Worker. I had also trained and been certified as a NY Red Cross Disaster Mental Health worker in April 2009. On January 17 I was recruited by the Red Cross to work as a Creole-speaking volunteer on the military hospital ship the USNS Comfort. I left to serve as a translator and was told to use my mental health skills as needed—and that the Haitians onboard the ship would definitely need them. For me, there was no saying, “No,” though I was faced with family and financial constraints.

I arrived on board the ship on January 22. By luck, that day, I sat next to the ship’s psychiatrist at dinner. After discovering that I was the only Creole-speaking Haitian social worker on the ship she said, “You have to participate in my mental health program.”

One cannot detail the enormous mental health needs aboard the ship, which had one psychiatrist, one psychologist, three military mental-health support staff and one social worker—me. The disaster brought the Haitian community face-to-face with many mental health issues: the death of loved ones, separation of families, loss of function, jobs, shelter, personal belongings and having to rebuild and recover in the mist of their own grief and medical issues. Many faced life-challenging questions—whether to amputate an arm, a leg, or both. Some faced the realization that they might never walk, sit, see or think the way they used to.

The experience of counseling fellow Haitians on the hospital ship helped me to reconnect with my culture. I met people from all classes in Haiti—men, women and children, young, old. This enriched my knowledge of what the culture is really about. They would call me their sister. The fathers and mothers would call me their daughter. They made me feel I had a purpose as a social worker—this was what I needed to use my skills for.

Traveling to Haiti has been rewarding in more ways than words can express. Thank you, American Red Cross in Greater NY, for giving me the opportunity to serve my fellow countrymen in a time of crisis.

Magaly Polo, a 42-year-old single mother of two, immigrated to New York from Haiti with her family when she was ten. Magaly, who now lives in Elmont, New York, is a licensed master social worker holding down three jobs: at Elmhurst Hospital in Queens, Brookdale University Hospital in Brooklyn and at Transitional Services for NY, Inc. She recently received the “Woman of the Year Trailblazer Award” from the Nassau County Executive’s Office for her work as a Red Cross volunteer aboard the USNS Comfort. She also received the Navy’s “Person of the Day” award, while serving aboard the Comfort.
Posted by nyredcross at 11:37 AM

Email ThisBlogThis!Share to TwitterShare to FacebookShare to Pinterest
Labels: Around the World, Down the Street, Haiti