“Would it not be possible, in time of peace and quiet, to form relief societies for the purpose of having care given to the wounded in wartime by zealous, devoted and thoroughly qualified volunteers?” 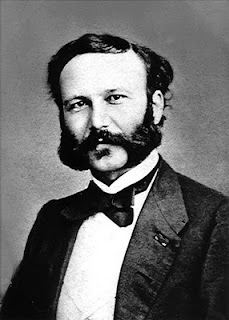 Jean-Henri (Henry) Dunant—the Swiss businessman who founded the Red Cross—never expected to have a life-altering experience when he set off in June 1859 to find Napoleon III. He simply wanted to register a business complaint about some French colonial bureaucrats in Algeria directly with the man who ruled the Second French Empire. To connect with Napoleon, Henry Dunant traveled from Geneva to northern Italy where the emperor was battling the Austrian army, with the goal of expelling Austria from the Italian peninsula.

Dunant arrived in Castiglione delle Stiviere in the evening of June 24 after a terrible day-long battle around nearby Solferino that had left close to 40,000 soldiers dead or wounded. He was deeply shocked by what he witnessed: the medical services were totally overwhelmed with just one surgeon for every 1,000 men, the stretcher bearers were poorly trained and boxes of medicines and bandages left at the rear never reached the front lines. Dunant was galvanized into action, helping to set up makeshift hospitals, working on the logistics of moving supplies to where they were needed and organizing the civilian population to assist the wounded. His business problem was forgotten, and Dunant’s overriding concern from this point on was to assist wounded soldiers, without discrimination, to the cry of “Tutti fratelli” (“We are all brothers.”).

On his return to Geneva “as if moved, possessed by a superior force and driven by divine inspiration,” Dunant wrote A Memory of Solferino in which he gave a detailed account of the battle and its gruesome aftermath. As he reflected on his motivation for writing the book, Dunant wrote, “Would it not be possible, in time of peace and quiet, to form relief societies for the purpose of having care given to the wounded in wartime by zealous, devoted and thoroughly qualified volunteers?” Published in 1862, the book was immensely popular, stirring the consciences of many people, and setting in motion the process that would lead to the establishment of the International Red Cross and the enactment of the Geneva Conventions—the international laws that spell out humanitarian treatment of victims during wartime.

One of Dunant’s admirers was Gustave Moynier, a Swiss lawyer and president of the Geneva Society for Public Welfare. Moynier realized that implementing Dunant’s ideas would change the plight of the victims of armed conflict and proposed that a commission study and disseminate these ideas. When this group convened for the first time in February 1863, it decreed itself a permanent international committee. Its five members believed passionately in their embryonic initiative and intended that it extend far beyond the narrow boundaries of their city. This decision marked the start of the Red Cross.

The “Committee of Five” was dedicated to giving concrete form to three underlying ideals of Dunant: the neutral status, during wartime, of victims and health personnel and material; the creation of national committees to assist the wounded; and the establishment of space protected by law during wartime. At an international conference in Geneva held on October 26, 1863, delegates from 14 governments adopted the founding charter of the Red Cross and invited all countries to set up committees and relief societies.

August 22, 1864, saw the adoption of the original Geneva Convention which incorporated into international law the rules governing the establishment of a neutral, humanitarian space on the battlefield. It was also at this convention that the universally recognized symbol of the Red Cross was adopted as the distinctive sign during wartime to mark hospitals, ambulances, evacuation vehicles and neutral personnel.

The Red Cross ideals were thus set to conquer the world. The visionary spirit of Dunant has never ceased to inspire humanitarian action, and he was awarded the first Nobel Peace Prize in 1901, which he shared with the French pacifist, Frédéric Passy. Henry Dunant died on October 30, 1910, at the age of 82.

Email ThisBlogThis!Share to TwitterShare to FacebookShare to Pinterest
Labels: Around the World