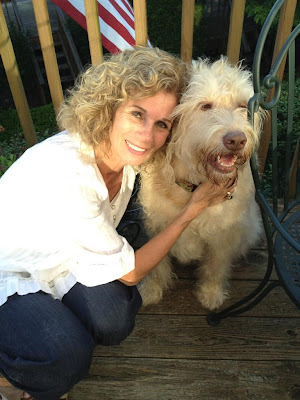 Several years ago, the Moccia household was filled with pets: our wonderful Schnoodle (a cross between a Schnauzer and a Poodle), Bingo; our cats and a hamster. Sadly, all of them passed away. Bingo was 18 when he died. He was ill for a while, but waited to see our oldest daughter, Elissa. The day after she came home from college, Bingo passed away.

Once all our pets were gone and our daughters were out on their own, my husband, Mike, said, No more pets, despite knowing I desperately wanted another dog. I would even put a leash around a ceramic dog we had and pretend to be taking it for a walk!
One day, seven long years later, Mike saw a TV program about a new breed of dog called a Labradoodle. Labradoodles originated in Australia, where they are a recognized breed and are bred to be therapy dogs.

A few years before Mike saw this program, I’d told him that one of my goals was to have a therapy dog. I first became aware of therapy dogs when my mom, who was suffering from Alzheimer’s, had to be admitted into a nursing home. As much as we wanted to still keep her at home, we could not. She had become a threat to her own safety. While visiting her at the home, a group and their dogs visited the residents. I saw what a wonderful impact the dogs had on the residents, including my mom, who had never really liked dogs. I never forgot seeing this.

Mike remembered all this while watching the program, which aired around the winter holidays. He told me about it, then asked me to view the tape he had made of the program. I immediately fell in love. He said to sit down as he had something to tell me—I could finally have my dog!

I did a lot of research. At that time there were only three breeders of Labradoodles in the United States, and the best one, Glen Eden, was in Virginia. I called and told them what I was looking for. I waited two months and there she was, my beautiful Skylar. It was love at first sight, right from the Internet. We drove to Virginia and picked her up. The love affair is still going strong.

I knew Skylar would make a perfect therapy dog because of her wonderful personality and her loving way. I went to Canine Coaching in New City, N.Y., where the owner, Pat Coglianese, worked with us both. Skylar graduated from “Kindergarten” and received her Good Citizen Award, and then we began therapy dog training. Our first attempt was not successful; Skylar was too young, just one-year-old. We waited until she was almost three and then—SUCCESS!

Skylar has provided much happiness to a group of autistic young men in a group home. She has also visited nursing homes. They love her large size, which makes it easier for bedside visits.

Pat told me about the pet therapy program being implemented at West Point's Warrior Transition Unit. Through the program, our therapy dogs would help Soldiers with physical injuries, as well as post-traumatic stress disorder and other emotional stressors brought about by battle and separation from family and loved ones. I immediately said we would be part of it.

Skylar is so excited on Wednesday when we get in the car and head up to West Point. We bring her favorite toy, a tennis ball. She loves to entertain everyone with it, playing catch. (I might add, she is a great catcher.)

It is fun for the Soldiers to watch Skylar interact with the other therapy dogs, especially Molly and Abby, with whom she shares the tennis ball. She loves to give kisses and she will “talk” to anyone to let them know she wants a treat, or to have a door opened for her!

It amazes me how she knows exactly what each Soldier needs from her, be it just to sit quietly and let them pet her, to give kisses or go over with her tail wagging. When there are no Soldiers around she is truly sad.

Skylar participated in the Army Community Service Valentine's Day party where children of deployed Soldiers were videotaped reading to her. The videotapes were then sent to the deployed parent. It was a beautiful experience.

Skylar and I are honored to be part of this program.

Posted by nyredcross at 3:49 PM