At the end of January, a slew of at least 60 tornadoes hit the Southeast leaving more than 1,100 homes affected across Mississippi, Georgia, Alabama, Louisiana and Florida. Red Cross volunteers from all over the country deployed to join the disaster relief effort, including several from right here in Greater NY. One of these individuals was Trudy Culley a Health Services volunteer with our Long Island Chapter. 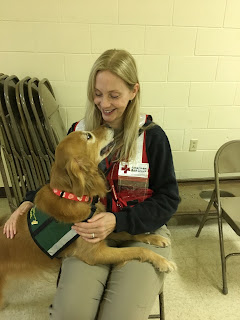 Trudy originally joined the Red Cross as a volunteer in 2012 after seeing the devastation left by Superstorm Sandy. As a registered nurse she deployed to Georgia in a Health Services role. Originally from Tennessee, her southern roots provided added motivation for her to travel far from home to help those in need. Trudy was kind enough to take some time from her deployment to talk with us and give some insight into her experiences on the ground.

Can you talk about the process of deploying?
[Previously] I never felt like I had an extended period of time where I could deploy. But when I heard about the Georgia tornadoes on the news, it actually just all fell into place. It was very quiet at home, and I had had enough training and enough experience to finally do my first national volunteer response. And so, I said I wanted to do it and I was in the air within 24 hours. Hearing about the location down South really spurred me to take extra action to make sure I got in front of somebody and said, ‘this is my chance, this is where I really feel I need to go right now.’

What does it mean for you to be helping out in Georgia for the Red Cross?
Because I was born and raised in Tennessee, I feel a strong kinship with Southerners. Coming here feels like coming home, and I thank the Red Cross for giving me this opportunity. People everywhere want to reach out and help their neighbors when disaster strikes. I think the desire is especially strong when you or a loved one have been through a disaster. The Red Cross gives me and all volunteers an organization through which we can use our skills to offer support and services to people everywhere in our country.

What were you expecting to see on the ground?
I knew the destruction was pretty devastating and I was prepared for that. But I didn’t have the notion for how spread out it was, you know, the miles and miles of devastation. I mean, this is a 16-county response. I think the radius is about 200 miles. The worst devastation occurred where I am, in Albany, which is in the Northwest of the state. 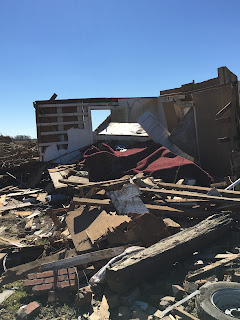 Can you talk about your work?
It’s kind of been a combination of casework, health services and a lot of outreach. For this disaster response, the area of devastation was so large that it took mobilizing a group of volunteers in pairs to fan out across the 14-county area for over a week to get to all the displaced and affected people. As part of the health services team, I provided assessment and care for affected residents with unmet non-emergency health care needs. Medications, blood glucose testing supplies, eyeglasses and dentures that were lost or destroyed as a result of the tornadoes are some of the items we replaced. Along with caseworkers, who offered assistance with food, clothing and shelter, we went out in teams to find and offer help to the victims.

Can you talk about the families that you met?
There’s so many; but probably what would encapsulate the experience the most would be a couple I went to see with two caseworkers two days ago in Bluffton, Georgia. (Right on the Alabama border.) They were living in a farm community, they had a trailer. The night of the tornado they realized they weren’t going to survive if they stayed, based on what they were seeing on the news. So they got in their car and drove five minutes south to a relative’s house, and 5 minutes later their trailer was completely destroyed. There is nothing even left, it’s just ground and a porch. We went out to see them and they met us at the property. They were just so thankful for everything. They were very open, very warm people and I’ve experienced that with everyone. They’re just so gracious and so willing to talk and receive care. A lot of times they will refuse the small amount of money we're able to give and say ‘give it to someone who needs it more.’

Can you talk about the camaraderie within the RC team from all over the country?
We are a big country with people from many different backgrounds and cultures. This disaster response has people coming together from Maine, Arizona, Virginia, Utah, Florida, Louisiana, just to name a few. When we as a team reach out together, the differences just disappear. It's a great feeling to be part of a team made up of people from all corners of America, to say together, "you are not alone. We are here for you." 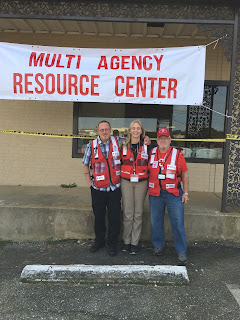 Posted by nyredcross at 4:13 PM