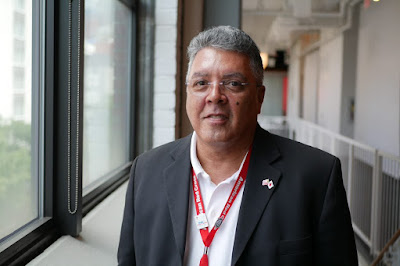 Carlos Menendez, a retired Corrections Officer, joined the American Red Cross in Greater New York last year after Hurricane Maria hit Puerto Rico. He spent several months volunteering in the Service Center set by NYC to help residents affected by the fall hurricanes arriving in New York City, before being deployed to Puerto Rico to do disaster assessment. He now serves the Metro NY North Chapter as a volunteer in multiple capacities.

What inspired you to join the Red Cross?

Hurricane Maria hit on my birthday, September 20th of 2017, and I said to myself, “Why on my birthday?” I’m watching the news, and I see the destruction and thought, "I can’t sit here and not do anything." Really for the life of me I couldn’t. I could not sit there and not get up and help. I’ve always been like that. My heart just went out for the people...I had always known the Red Cross to do things for people because when my sister died in 1971, I was in the military, and the Red Cross was able to reach me with the news. So when I saw the destruction [in Puerto Rico], I felt that the Red Cross had helped me in the past, so I wanted to be somebody that could help somebody else.

Can you tell me about your experience working in the Harlem Service Center?

I went to the Service Center for the refugees that were coming in from Puerto Rico. I went there as a volunteer to help, and I ended up staying for four months. I stayed. I was there October, November, December and January. And then January is when I deployed to Puerto Rico, and I didn’t get back until February.

When I was in the Service Center, I helped one man who had open heart surgery about a month before and was sleeping in a two-bedroom apartment with eleven people. He was sleeping on the floor, and he was in his 80s. And through the FEMA TSA [Temporary Shelter Assistance] program, I was able to help get him a hotel room. And while I was at the Service Center, I was able to help house close to 40-50 families through that FEMA program. I had another girl that I housed – she had three kids, one of them was autistic – and she had nowhere to go. I made referrals for mental health and medical services, and we were able to house her in a hotel down in the city.

I was rewarded by seeing people being able to continue with their lives. Some people lost everything and don’t know how to deal with it. If I could be that one little thing that could help them move on and help them start their lives over again, then I have to do it. So in the four months I developed a rapport with everyone around me where they were coming to me with questions.

Can you tell me about your experience being deployed to Puerto Rico?

To me it was a privilege to go to Puerto Rico and do disaster assessment there. I was there for a month. I went into the mountains, areas that were maybe 1,500 feet above sea level. And I saw the destruction in the mountains. When people see you, they’re so loving. I don’t know how to explain it. You go into somebody’s house and right away they want to feed you. They want to feed you with the little they have. And I would say, “No, no, it’s ok.” I went to one elderly couple that had nothing. They lived on the side of the mountain and they farmed off the side of that mountain. Their whole crop, everything, was lost. They had no water, no lights.