Living under the constant threat of a global pandemic means we have all needed to adapt to a new ‘normal’, and the anxiety that goes along with it. In the midst of this ongoing COVID-19 outbreak, Carol Aponte experienced a second unimaginable emergency: a three-alarm fire that forced her from the Bronx home she had not left since the coronavirus crisis started weeks ago.

Aponte was born and raised in The Bronx and had lived in her apartment building near Pelham Parkway for about a year. Aponte recalled that the fire started a few floors above her. The flames eventually reached other parts of the building; her belongings were destroyed by smoke and water.

“It was a dangerous situation,” said Aponte. “I had to go. It was only five minutes. Five minutes. You’ve got to get what you can and get out.”

Aponte had just ordered pizza for the whole family on March 27, when the fire started. Her first instinct was to grab her sons, grandson and pets and escape the advancing smoke and flames. But as she corralled her dog, her cat disappeared somewhere inside the unit amidst the chaos. But Aponte knew she needed to get out. During her panic, she left her wallet behind, but she did remember other critical items: her medical mask and gloves - a sign of the times.

Aponte explained the fear she felt leaving the building: “I started running and running, and I passed by all my neighbors and I just kept going and going.” She was running to keep her family away from the fire scene and to maintain social distancing.

Several blocks from her home, Aponte placed her family in the safety of her brother’s care and made her way back to the scene. Waiting for her in front of her building was a Red Cross team member, at a safe distance, offering her guidance, reassurance and financial assistance. Because she could stay with her brother, she turned down the Red Cross offer of temporary housing. 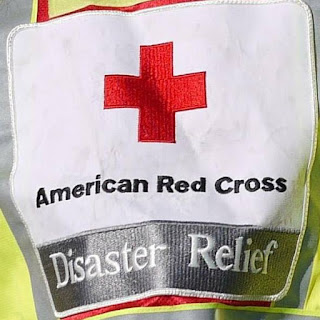 “[Red Cross] gave me a sense of security in which everybody needs in this very moment, and not everybody has it,” said Aponte of the many staff she spoke to in person and over the phone after the fire.

The blaze in Aponte’s building was the second large fire in NYC that night. Later that evening, the Red Cross would help dozens of residents displaced by a multiple-alarm incident in Brooklyn. Since March 22, when the official coronavirus stay-at-home order across the region began (and through April 19), the organization has provided emergency relief to nearly 700 people following 130+ incidents, mostly home fires, across Greater NY. As this crisis has evolved, the Red Cross has adapted the way it responds to these local disasters with new safety measures including remote casework and registration, social distancing in the field, and the use of face masks.

One of the many volunteers providing remote disaster relief for the Red Cross in Greater New York from home is Charleen Turner: “As Red Crossers we help people who are experiencing a disaster. But we’re all experiencing this disaster,” said Turner, who worked closely with Aponte over the phone after the fire. “So we’re not only helping those experiencing it we are also in the middle of that ourselves, which is a very unique position.”

For Aponte, the days after the fire have been challenging, but there have been signs of hope. A few days after the emergency, with the help of Red Cross caseworker Charleen Turner, and a her building superintendent, who escorted her into her destroyed apartment, she was reunited with her cat, Boots. 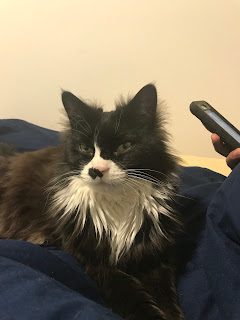 “I felt like crying because I didn’t think he would come to me,’” she said. “I took a deep breath and an extreme exhale.”

Aponte has subsequently found a temporary apartment with the help of a friend and is comforted by the presence of her children, grandchild, and both of her pets. She says her family, friends, local church, and the Red Cross have been instrumental as she seeks to rebuild her life.

Among the many friends and strangers who helped her, Aponte expressed particular gratitude to Charleen Turner, her Red Cross caseworker. Recalling their multiple interactions, Aponte reflected: “She has so much empathy, made me feel that I am not alone.”

Posted by nyredcross at 1:39 PM