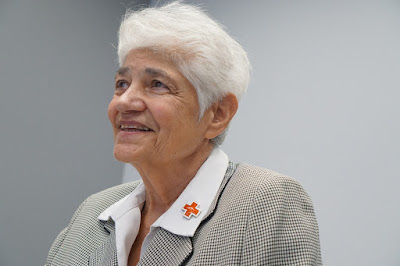 In December of last year, longtime Red Cross volunteer and Brooklyn native Georgine Gorra got some shocking (yet wonderful) news: She would be among a select group of volunteers from around the world honored by the International Federation of Red Cross and Red Crescent Societies (IFRC), the umbrella organization representing humanitarians in 192 countries.

“I know so many people who are volunteers. I know extraordinary human beings. We’re all the same. I was quite taken aback by it [the award]. Took me a while to accept that I got it,” she said, shortly after being awarded the IFRC National Society Outstanding Volunteer honor.

Gorra, who grew up near the Verrazano Bridge, says her family was deeply involved in WWII - her father and uncles all served - though she describes it as a quiet sense of pride and service that stuck with her.

The concept of service to her own community was also instilled in her at a very young age, as she often witnessed her neighbors helping each other on a daily basis. She says she knew everyone in her community and that every single person helped each other regardless of their backgrounds. If someone passed away, neighbors left food at the door. If someone was struggling, the same thing happened.

Like many New Yorkers, Gorra was driven to volunteerism with the American Red Cross by the events of Sept. 11, 2001 and became increasingly more involved; she now volunteers her time across three areas of service including Service to the Armed Forces, Volunteer Services and Disaster Mental Health. She often balanced this volunteer work with her day job as a licensed practitioner of social work, a position she held for 35 years before retiring seven years ago.

“I believe in the human spirit and the human being’s ability to bounce back,” said Gorra. “So, I found in the Red Cross a group of people who were very like-minded. The cornerstone of the Red Cross is compassion.”

While she’s traveled to numerous regions and has met countless people affected by disaster and trauma, Gorra says it isn’t one event that’s more or less catastrophic than the other. For her, any such incident involves harm to humanity - whether it involves one person or a hundred.

Speaking about the complex emotions that disaster survivors cope with, Gorra said: “They’re in shock. Later on they may become angry. Or depressed even. It’s important to just let people start to heal and ensure that people are connected to one another - whether with their church, their family, their synagogue. And the Red Cross always tries to go the extra yard.”

At 70, Gorra has hope for the future of service and giving back. After officially receiving her IFRC award in December, she had the honor of speaking to a group of young people at the United Nations. The theme of her presentation was service.

“Although most people volunteer when they retire, I think that young people would do it,” said Gorra. “We just need to give them the invitation.”
Posted by nyredcross at 1:12 PM