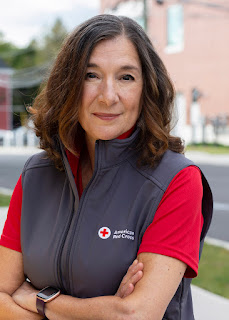 On September 11, 2001 I was on the #4 Train on my way back to my home in Brooklyn from a breakfast meeting in Midtown earlier that morning. I was going to get my suitcase at home and then grab a cab to LaGuardia to head to an out of town business meeting in Colorado.

Just as the train pulled into Fulton Street (under the WTC) around 9:30am, it came to a halt and we just sat there with no information because cell phones did not work underground in those days. After a time, the doors to the train opened and several people covered in ash and blood boarded the train in panic and told us that two commercial airliners had crashed into the Twin Towers.

They finally allowed the train to move forward to the Brooklyn Bridge station and then told us to evacuate. As I left the train station – the dust and ash in the air made it look like a blizzard and as I looked back, I saw the Twin Towers collapsing as if it were a melting wedding cake. In a state of shock and disbelief, I crossed the Brooklyn Bridge on foot and walked to my home in Carroll Gardens. As I was walking towards my home, I saw memos and other papers that had blown across the river from the impact of the explosion in the tree in my garden. They were from Cantor Fitzgerald, one of the businesses that were decimated during the attack.

When my husband finally got home that evening, the first thing we agreed on was to go to the Red Cross Blood collection site then in Brooklyn Heights to donate blood to the victims. The line was long and the Red Cross volunteers came out and told us they were not collecting because sadly, the hospitals were not admitting any survivors. In the days that followed, I made a donation to the Red Cross and also brought some batteries to a Red Cross station near the site. What haunts me to this day, are all the posters that were placed all over the city for people looking for loved ones. I will never forget that day for the rest of life and I am so glad that the Red Cross was there to help and is helping us to commemorate that unspeakable tragedy.

Mary J. Barneby
Posted by nyredcross at 11:24 AM

Email ThisBlogThis!Share to TwitterShare to FacebookShare to Pinterest
Labels: September 11