“I think that Red Cross will always be in my life.” 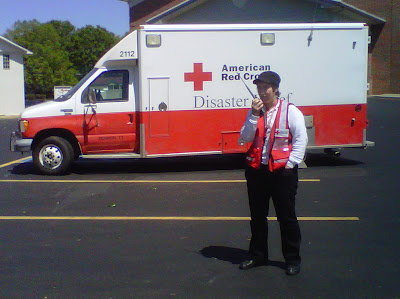 For years, Jessica Powers, better known as Jess, has been feeding people. She has worked as a chef, an event caterer and managed an emergency feeding program. Until last year, she was a Red Cross employee; now she is a volunteer. She currently works for WhyHunger, a non-profit organization committed to ending hunger and poverty in the United States and around the world. At WhyHunger, she is Director of the National Hunger Clearinghouse, which supports the National Hunger Hotline (1-866-3HUNGRY) and emergency food providers.

As a Red Cross mass care volunteer, Jess continues to meet the needs of those who are hungry. On April 29, she was deployed to Rainsville, Alabama (a small rural town northeast of Birmingham) to assist with the Red Cross tornado relief efforts. A group of volunteers from Red Cross partner organization the Southern Baptist Convention cooks the meals, and Jess, as Kitchen Site Manager, oversees and coordinates the delivery of those meals by Red Cross volunteers. “The capacity of our kitchen is 20,000 meals a day,” she said. “Right now, we’re serving about 2,500 people two meals a day—lunch and dinner.”

Feeding that many people in a tornado-ravaged rural area isn’t easy. Some of the drivers on Jess’s team must travel for over an hour to reach people. “It’s a logistical challenge,” she said. “We’re working with local fire departments and sheriff's departments who know the community. Some people will go to the sheriff’s department to pick up their meals—so we’ll park our Emergency Response Vehicle there or we’ll drop meals off there and church volunteers will drive the food even further out.”

In addition to seeing that the hungry are fed, Jess also has to look after her team. Given the long hours volunteers sometimes must work, part of Jess’s job involves making sure that everyone is getting a break when they need it. “There is the potential to develop secondary trauma on this job,” she said. “I’m kind of isolated, so I’ve only seen a minimal amount of the destruction caused by the tornado, but what I did see was really shocking—for example, an entire diner that was shredded.” Some of the other members of Jess’s team see this level of destruction routinely, so she tries to monitor their stress levels.

Despite the challenges she faces, Jess is often encouraged by her work with the Red Cross. “My favorite part is witnessing the resiliency of people,” she said. “It’s very moving to see people come together and help each other.” Jess recalls meeting an elementary school teacher who saw the building she had worked in for more than 20 years destroyed by a tornado. The teacher is devastated and not sure she’ll ever be able to go back to that school, but she’s also one of the volunteers coming in every day to sort clothing donations for people in need.

Jess is also inspired by the diversity and commitment of the Red Cross volunteers. She sees senior citizens working 15-hour days, driving the food delivery vehicles, and lifting heavy objects. Younger men from the community come in with chainsaws and ask if they can help clear debris. And high school kids regularly help with tasks like folding and organizing clothes.

Jess sees the value of volunteering reflected in the faces of those she’s helping. “They are always grateful,” she said. “Some are stressed out. Some are sad. A couple people come and burst into tears. It’s part of the recovery process.” And so she remains committed to volunteering. “I think that Red Cross will always be in my life,” said Jess. “I feel very strongly about the mission and the work.”