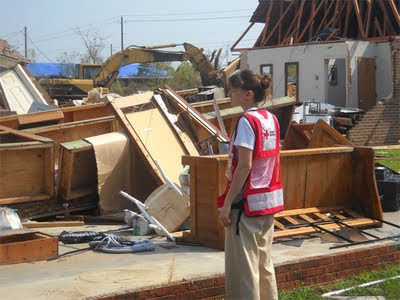 As the country’s attention turned to tornado-ravaged Alabama and preparations for flooding relief efforts along the Mississippi River, five NY Red Cross volunteers were concluding their deployment to Red Cross tornado relief efforts in North Carolina. One of them, AmeriCorps member Martha van Gelder, left for Smithfield, NC about a week after a violent band of storms tore through parts of that state, leaving hundreds homeless. As her stay was winding down, we talked with her about the experience.

When did you find out that you were going to deploy?
On Saturday, April 24th, I was planning to celebrate my grandmother’s birthday upstate but at 9:30 that morning I got the call that I was being deployed as a caseworker. I left the next morning.

When did the storms hit that area?
The 16th of April, so we were actually there pretty late into it. This is normal for caseworkers. When you have a big disaster, the first people to come in are the sheltering and damage assessment people. You can’t really do casework until after you understand what kind of damage people have suffered.

What was your role exactly?
I was deployed as a caseworker. I traveled with mental health workers and nurses to clients’ homes to discuss the disaster-related needs. As a caseworker, I was often able to pass on emergency financial assistance as well as referrals to local organizations. My partners were able to offer services which ranged from a voucher for new eyeglasses to mental health counseling.

What kind of damage did you see?
You’d have houses that were nothing but rubble, and right next door there would be a house that only had a couple of shingles missing. It was pretty un-nerving to go down a peaceful-looking neighborhood, turn a corner, and see a block of complete destruction.

How would you describe the general mood of the people you helped?
This was several days after the disaster, not immediately following the storm, so people were trying to move on. Some people were confused about why it had happened to them and not the person next door.

A couple days after I arrived, there was a pretty bad storm approaching, and a tornado watch was in effect. After seeing all these houses that were completely destroyed, it didn’t make me feel good when people said to just hide in the bathroom—because there were all these places where everything including the bathroom was gone. Then the watch became a warning, which means you should find shelter right away. I didn’t think it would be frightening, but after seeing destruction day after day and talking hearing people’s stories, it was a little scary.

Yet I can’t imagine what it must have been like for our clients who had just gone through the disaster. So to answer your question about the mood, I think that people were trying to move on but were still traumatized.

What do you think you will take away from the experience?
It was really interesting to see how a large-scale disaster relief operation is organized. Here in New York, the largest scale disasters I’ve been to are five-alarm fires. They’ve seemed pretty big, but they don’t require the same extent of coordination between functions. In North Carolina, we were working with damage assessment, shelter workers, health services and staffing, all at the same time.

Also, as part of my team included a mental health worker, we took the time to discuss the emotional impacts of the disaster with every client. We listened to their stories and discussed recovery plans. Many showed real resiliency and hope in moving forward, and I’m glad we got to represent the Red Cross as part of that process.
Posted by nyredcross at 1:24 PM

Email ThisBlogThis!Share to TwitterShare to FacebookShare to Pinterest
Labels: Across the Country, Alabama, North Carolina, Tornado