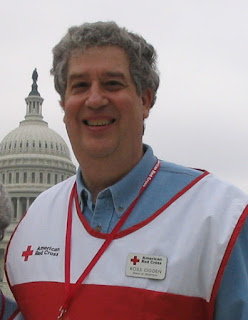 Few people can claim to have volunteered with the Red Cross for more than 50 years. Ross Ogden is one of them.

Ogden began volunteering with the Red Cross Greenwich, Conn. chapter’s youth department way back in 1960; he was in high school at the time. His commitment continued at nearby chapters while he was getting his BA at Swarthmore College in Pennsylvania and his MBA at the University of Virginia.

Since he’s begun volunteering, Ogden has done a variety of jobs. He has worked with the Greenwich chapter as a blood volunteer, an active Disaster Action Team (DAT) member. He has participated in more than 20 Disaster Services Human Resources assignments (i.e., traveling to volunteer at Red Cross disaster relief operations across the United States), and been a member of Greenwich’s Emergency Blood Coverage team. He has served on the Board of Directors for multiple terms since 1974, and is currently on the Board of Advisors.

It is this variety of opportunities for service that has helped to keep Ogden engaged with the Red Cross. “It is such a broad humanitarian effort,” Ogden said, “that I always feel like there is something new to do at the Red Cross to help people, and that makes it interesting.”


Gaining by giving
And just as Ogden has given of his time and talents to the Red Cross, the Red Cross has provided him with opportunities he may not have otherwise had.

“I‘ve always felt that the Red Cross has given me far more than I’ve ever been able to give to it,” said Ogden. “There is so much to gain from volunteering—so much satisfaction from helping other people, so much to learn, so many new friends to make, so many different things to do and experience.”

One such opportunity he is particularly grateful for is when the Red Cross paid for him to attend a three-week program run by the Hauser Center for Nonprofit Organizations at Harvard University’s Kennedy School of Government.


Gratitude for recognition awards
Due to the quality and longevity of his service, Ogden has been recognized on numerous occasions. Among others, he has received both the Clara Barton Award and the Harriman Award for Distinguished Volunteer Service—the highest honor bestowed upon a Red Cross volunteer at the national level. But despite the accolades, he has remained a humble server.

“The Harriman Award was unexpected,” Ogden said. “I can remember my early days at the Red Cross, being at the convention, seeing someone become the recipient of the Harriman Award, and thinking, “Wow! That person is just amazing.” It’s not anything I ever expected to receive, and I was enormously surprised and deeply grateful for that recognition.”

What Ogden values most—even above the awards—are the deep and diverse friendships he’s made while serving the Red Cross. When he received the Harriman Award in 2010—an honor that coincided with his 50th year of service—his words brought the crowd to its feet, “It’s not the award for which I am most grateful” he said. “Instead it’s the volunteer experience the Red Cross has given me that I truly appreciate.”


Wide-ranging volunteer experiences
And his experiences have been greatly varied. He has sat with a cancer patient receiving a life-saving blood transfusion. He has administered CPR to a heart attack victim. He has spent the night in a hospital trying to console a sailor whose wife had committed suicide. And countless times he has helped bring food, shelter, comfort and hope to people who have lost everything due to a natural or man-made disaster.

There just isn’t a job Ogden won’t do, and he enjoys all of them—especially when he gets to come face to face with those he is helping and see firsthand the impact of his service.

Even after more than 50 years of working as a volunteer, Ogden remains committed to the future of the Red Cross. He wants to see the organization continue to increase service delivery, empower communities and succeed in encouraging more people to volunteer in new and innovative ways. He is also committed to mentoring young volunteers.

“The most important thing I can do now,” said Ogden, “is to try and instill in others—particularly in young people—the thrill, excitement, and lifetime of reward that they can get out of volunteering for the Red Cross. In working with the Red Cross as a volunteer you really gain by giving.”
Posted by nyredcross at 2:25 PM