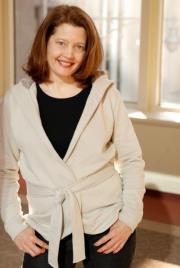 Suzanne Solomon grew up in Miami, Florida, but has been a New Yorker since 1987 when she moved here for her career. By day, she works in legal publishing; by night she writes crime fiction.

After 9/11, Suzanne began volunteering with the Bar Association. She took sworn statements for the New York City Law Department’s Expedited Death Certificate Program—helping the families of those presumed dead due to the World Trade Center attacks. Suzanne was paired with a Red Cross mental health worker, and still cherishes the chapter pin she received from her partner.

In 2005, after seeing the devastation caused by Hurricane Katrina, Suzanne formally joined her local Red Cross chapter in New York City. She began as a disaster reserve volunteer, and then joined the “Night Blue” Progressive On Call (PRO) team that sets up Red Cross reception centers and shelters when needed.


A family history of Red Cross service
Suzanne isn’t the first in her family to donate her services to the Red Cross. Her great-grandmother volunteered with the Red Cross during World War II at the U.S. Army Air Corps training headquarters in Miami Beach.

This connection to the past is one Suzanne takes seriously. “I feel that one of the important values families can pass down is a legacy of community service,” she said.


Two extraordinary volunteer experiences
Suzanne has had many memorable experiences as a Red Cross volunteer, but two particularly stand out in her mind. As a member of the Night Blue PRO team, Suzanne took part in the relief effort for the emergency landing of U.S. Airways Flight 1549 on the Hudson River in January 2009. She worked at the Family Assistance Center, providing clothing, comfort kits and emotional support to the passengers.

“What struck me the most,” said Suzanne, “was that the passengers I spoke to—who’d very nearly lost their lives—took nothing for granted. They were unfailingly gracious and grateful for the help of the Red Cross.”


Volunteering for Hurricane Irene
More recently, Suzanne worked as a logistics volunteer for the Disaster Relief Operation Headquarters in the days before and after Hurricane Irene. She spent a lot of time on the road driving volunteers between the chapters in New York City and Long Island. She even slept over at regional headquarters in Manhattan.

“It was an unforgettable experience,” said Suzanne, “to shelter at chapter headquarters during the storm with Red Cross volunteers who had travelled to New York from across the country to help.”

It is the people she’s met (those she’s worked with and those she’s helped) that keep Suzanne motivated to serve. Suzanne says volunteering for the Red Cross has been an incredible learning experience, and she’s grateful to everyone at the Red Cross who has helped her grow as a volunteer.

“Flexibility, patience, a sense of humor and the ability to make good hot chocolate go a long way,” she said.
Posted by nyredcross at 12:24 PM