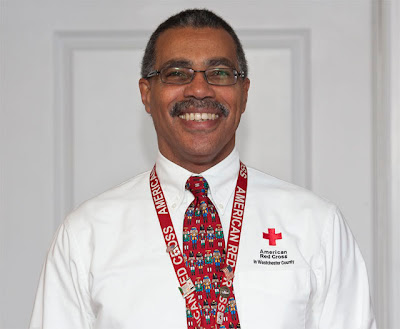 Since Ken Creary began volunteering for the Westchester Red Cross four years ago, he’s undertaken so many volunteer roles that it’s easy to lose count.

As a Disaster Response Team (DAT) leader and coordinator, Creary responds with his team to fires, floods or other natural or human-caused disasters to provide food, shelter, first aid and mental health support for those affected. He also manages his team’s schedule, finding the right balance between having a sufficient number volunteers on-call for each shift while making sure no one is over-committed.

As a member of the newly formed Volunteer Management-On-Call team, which complements the Red Cross staff in decision-making responsibilities, Creary serves as a resource for all Greater New York region Red Cross DAT coordinators, giving guidance on what services should be provided after an incident.

Creary also represents the Red Cross as part of the Westchester Emergency Operations Center (EOC). When a major disaster occurs in Westchester County, the EOC is activated and pulls representatives from the county agencies and their partners into one location to efficiently coordinate resources.

If all this weren’t enough, Creary is also a member of the Aviation Disaster Task Force that provides mental health support for those affected by an aviation disaster.

Given all these volunteer responsibilities, it should come as no surprise that Creary was the recipient of the 2011 Westchester Red Cross Disaster Planning and Leadership Award.

“Ken is an amazing volunteer and a major player in just about every area of disaster,” said Maritza Meadows, Metro New York North assistant director of emergency services. “I’m not sure what we would do without him.”

For his part, Creary is unwavering in his praise of the Red Cross. “The Red Cross is unparalleled in its ability to respond to disasters and has extremely dedicated, highly motivated volunteers,” he said.

“In one of the Red Cross training videos a volunteer stated something along the lines of ‘This is the best job you've never been paid to do.’ It is so true.”

Creary added, “We need to encourage more people to volunteer. It is often when things are at their worst that we see people at their best.”
Posted by nyredcross at 3:46 PM