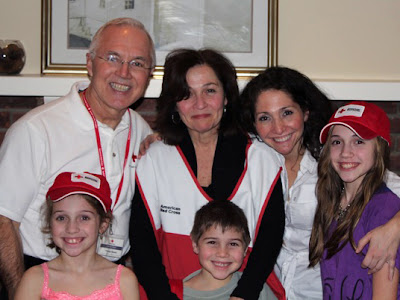 This has been a particularly active year for Tom Hlenski, who has been a Disaster Mental Health (DMH) volunteer with the Long Island Red Cross since 2005.

During Hurricane Irene, Tom, who holds a doctorate in social work and maintains a private practice in Nassau and Suffolk counties, worked at the then-Red Cross Suffolk headquarters in response operations. He offered emotional support to those affected by the hurricane, including those requiring shelter, before, during and after the storm.

Tom also had the recent opportunity to get involved with the New York City Red Cross through an ongoing liaison with that chapter’s disaster mental health volunteers. As part of this liaison, Tom and his wife, Donna Cain-Hlenski, a licensed clinical social worker who also volunteers in DMH, were invited to be part of the 2011 ING NYC Marathon Red Cross medical team. DMH volunteers were prepared to assist marathon participants and others experiencing psychological stress as a result of running or working the marathon, as well as families of the runners who required care.

Tom said he had two strong reactions to having worked the Marathon. “First,” he said, “I continue to be amazed with the scope of the Red Cross and its dedicated volunteers who provided a host of services to the runners. Second—what an exciting event to be a part of!”

Tom joined the Red Cross as a spontaneous volunteer in 1995 to help the families of the victims of the crash of TWA Flight 800. Tom assisted the families and first responders, working alongside Red Cross Disaster Mental Health experts. He was impressed by the training and professionalism of the Red Cross workers. He knew someday he would want to dedicate more of his time to volunteer work, and kept the Red Cross in mind after that initial experience.

Around the time Hurricane Katrina hit in 2005, Tom, inspired by Donna, who had long been involved in volunteer organizations, which included volunteering and serving on the board of Make-a-Wish Foundation, decided he wanted a more active role as a Red Cross volunteer.

Tom’s first Red Cross deployment was to Florida, where he provided emotional support to families affected by Hurricane Wilma, as well as to first responders and other Red Cross volunteers.

Today, Tom and Donna’s grandchildren, 12-year-old Emily Ray, 8-year-old Lainey Grace, and 6-year-old Cain Thomas, continue to motivate them to serve. Tom has even spoken at the children’s school about the Red Cross and how it feels to help others. He hopes that someday they too will want to volunteer.

Tom proudly points out that 2012 is the 20th anniversary of the Red Cross’s Disaster Mental Health group and that DMH is a huge part of today’s relief efforts. It is now common to see mental health workers at disaster sites and in Red Cross reception centers and shelters across the Greater New York region, supporting volunteers, employees and Red Cross clients.

Diane Ryan, regional director of mental health and client services for Greater New York, met Tom three years ago, when they both responded to the tragic aviation incident in Buffalo, N.Y.

“Over the course of the 10 days we worked together,” said Ryan, “Tom impressed me with his manner of providing support to those in great emotional pain, his flexibility to do whatever was needed, and his support to all of the Red Cross and other agency workers.”

Even as Tom maintains his practice as a private health practitioner, he is dedicated to putting in the necessary hours it takes to keep the DMH group in top shape.

For instance, Tom is always looking to recruit volunteers. He explains that a great deal of work goes on behind the scenes before a disaster strikes, including regularly scheduled leadership meetings, conferences and calls. Additionally, DMH leaders are constantly working to develop and improve “Best Practice Strategies and Procedures.”

Tom believes that what you get back from volunteering far outweighs any disruption to your “regularly scheduled” life.

He said, “The feeling you get going out after a disaster strikes by being part of the mending process and connecting with the people who need you right then and there, is so powerful and rewarding.”
Posted by nyredcross at 12:14 PM