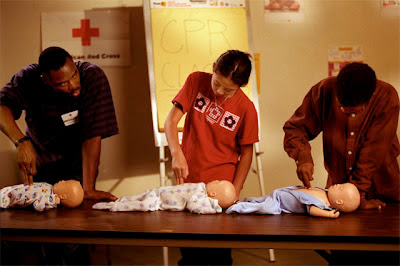 Though I am new to the Red Cross as a volunteer, I have had a relationship with the organization since childhood.

I grew up in Florida, as part of a family that was heavily involved in scouting. My parents were scout leaders and my brother and I were scouts in Brownies and Cub Scouts until we were teenagers. Both my parents were also Red Cross volunteers who taught first aid and CPR classes in our communities.

As soon as I was old enough, at age sixteen, I completed Red Cross lifeguard training and started lifeguarding at the Girl Scout camp I attended as a child.

Later, I became a water safety instructor and was also able to teach swimming lessons, water safety and rescue breathing. I continued lifeguarding through high school and college and always kept my certification up to date.

My brother became a trained EMT/firefighter. It was engrained in us, from both from scouting and our Red Cross training, to always be aware, prepared and safe.

After college I moved to New York and got a job as a public school teacher. Life was busy and hectic, and I was under pressure to get my required master’s degree in order to keep my job. All my Red Cross certifications lapsed and getting re-certified wasn’t a priority.

Ten years later, shortly before I had my first child, I brushed up on my first aid and CPR knowledge through the Internet. I knew I should take a refresher course, but I was confident that I would know what to do if I ever needed to use it.

When my daughter was an infant I spent many hours standing over her watching her breathe, as many a new and anxious mother will understand. The tiny creature in the crib was so helpless, and yet so unimaginably everything to me.

Sleep became a constant battle in my post-partum life. For me to sleep, she needed to sleep—but only long enough so that I wouldn’t run frantically into her room to make sure she was still breathing. Of course she was always breathing, but hormones and fatigue didn’t allow me to see that my fear was irrational.

By the time my son was born three years later, I felt like an old pro at being a mom. I didn’t suffer the same post-partum anxiety with my newborn this time, and it was a relief to feel like I had things under control, especially since I also had a toddler with her own set of needs. I was actually getting some sleep too, because I didn’t have that urge to check to make sure the baby was breathing all night long.

When my son was two weeks old, I left him with our regular babysitter so that I could take a friend to lunch as thank you for taking care of my daughter when I was in the hospital having my son.

The fact that I left him at all, even for just a couple of hours, was testament to how comfortable I felt this time around, since I never left my daughter with anyone until she was over a year old.

He was very fussy that day, but as I told myself, “It’s okay. Babies cry.”

All afternoon and evening he fussed and cried and barely slept. I was certain this was the beginning of what it’s like to have a “colicky” baby. He was eating normally, all of his needs were being met and he was just about the right age for the always-dreaded colic to kick in.

After hours of rocking, bouncing, soothing and singing, he finally fell asleep in my arms. I was exhausted, but afraid to transfer him into his bassinet for fear that I would wake him, so I carefully sat on the couch and held him on my shoulder. My husband and I turned on the television and planned to relax and watch our favorite sitcom.

About ten minutes in however, I had what I can only describe as a “mother’s instinct” moment and I somehow just knew that something was wrong. My son, who had been sleeping soundly on my shoulder, was sleeping a little too soundly. I quickly flipped him into a cradled position and found him purple, limp and not breathing.

I immediately shouted at my husband to call 911, dropped to my knees and laid my lifeless son on the floor.

The next thing I knew, my baby was screaming. His face was flooding with color and he was spitting mad.

Apparently, I had just performed CPR on my newborn son. I don’t remember doing it. I don’t know how I had the wherewithal to do it. I don’t even remember what I did exactly. It came to me as if in a dream, and it came as naturally as if I did it every day.

The cause of my son’s ALTE (acute life-threatening event) turned out to have been a blood-infection. His tiny body became septic and just shut down. He spent the next two weeks in the hospital on intravenous antibiotics to clear the infection, but there was no permanent damage to his brain since he was resuscitated immediately.

It is still almost unbearable for me to think about what would have happened that night if I had laid my son down right after he fell asleep, or if the ALTE had happened when he was with the sitter. We were incredibly lucky. But luck aside; when it all comes down to it, it wasn’t luck that saved my son’s life. It was training.

He is a joyful, healthy 8-year-old today because I learned CPR from the Red Cross when I was a teenager. And you can bet that my children will be trained as soon as they are old enough—because you never know when you might need it.
Posted by nyredcross at 12:08 PM

Email ThisBlogThis!Share to TwitterShare to FacebookShare to Pinterest
Labels: CPR, Down the Street