“Bad if There’s an Earthquake.” 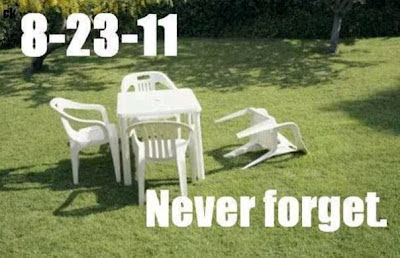 A few years after my husband and I moved into our Queens, N.Y., apartment two decades ago, my then 12-year-old cousin, Ted, visited from out of town. The kid took one look at the two bookcases in our hallway leading to the master bedroom and scowled.

“We really don’t have earthquakes in New York,” I said, recalling that I’d slept through a small earthquake in New York years earlier. “Just tiny ones.”

“You never know,” said Ted, who as you may have guessed was—and still is—living on the West Coast.

Ted had already experienced many earthquakes in his life, including the 1989 San Francisco quake, from which he and his family emerged unscathed.

I’m reminded of this incident today, because it’s the one-year anniversary of the 5.8 earthquake that struck Virginia—and was felt right here in NYC.

I was at work at Greater New York Red Cross headquarters on 49th Street in Manhattan when a colleague said, “Do you feel that? Do you feel the building shaking?”

The building was gently swaying. It was an unsettling sensation, which happily passed pretty quickly.

Which brings me back to the two bookcases that are still lining the hallway leading to my bedroom: It’s probably time to have our building superintendent secure them to the wall.

Email ThisBlogThis!Share to TwitterShare to FacebookShare to Pinterest
Labels: Down the Street, Earthquake, Queens