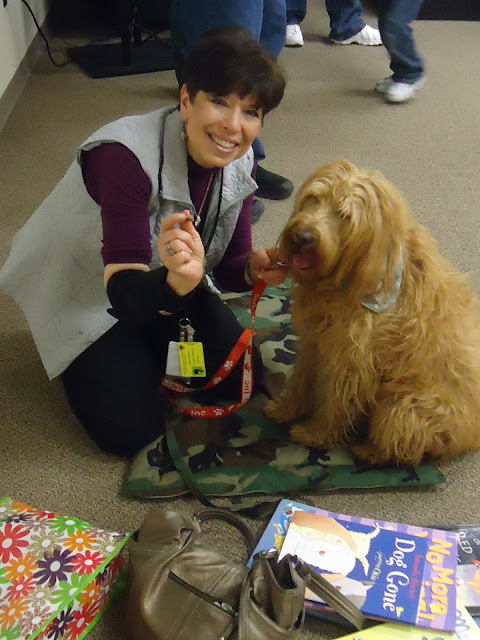 Lorraine Brown and her husband, Les, have always owned dogs, each one unique and special. After their last mixed Lab passed away, Lorraine decided she wanted a new dog, one with the temperament to be trained as a therapy dog.

Although the family was going to search for a shelter animal, their vet recommended that they look at a sweet apricot-colored Labradoodle pup with a lovable nature; the last of a litter of seven. The connection was instant: The puppy threw herself on them and blanketed them with kisses.

Lorraine enrolled Meeka in puppy training almost immediately and, at four months, Meeka proved to be a quick learner of obedience commands. She continued in classes to become a Canine Good Citizen, followed by training to be a therapy dog.

Upon graduation, Meeka and Lorraine became regular attendees at Friedwald Nursing Home in New City, New York. After a few visits, Meeka embraced her new status as a therapy dog, happily greeting residents with a wagging tail. Her joy took on new dimensions, and she actually displayed a smiling face when she met family visitors with children.

With Meeka’s happy disposition and good nature with people, it was easy for Lorraine to decide to get involved with the Warrior Transition Unit (WTU) at West Point as part of the Red Cross Pet Therapy program.

Again, Meeka proved herself to be a social creature, enjoying her interaction with the Soldiers, bouncing, with her tail wagging. When approaching West Point, Meeka’s excitement becomes evident as she plunges out of the car, pulling Lorraine toward the WTU. She invariably has fun spending time with her other therapy dog friends and saying her hellos to the Soldiers and other personnel.

With Meeka’s joy in meeting children, it was logical for Lorraine to obtain a R.E.A.D certificate and get involved with the younger population. In their first experience, Lorraine and Meeka attended a Valentine’s Day party at the Army Community Center, where children of deployed Soldiers read to individual therapy dog teams. Meeka eagerly awaited pets and hugs as she obediently lay down between Lorraine and a youngster.

Lorraine feels so very fortunate and proud to be the owner of this special dog, Meeka, and of how Meeka shares the gifts of love and joy. They both look forward to discovering many more opportunities to enrich people’s lives.