"It’s a normal day, and the next thing you know your building gets hit by lightning." 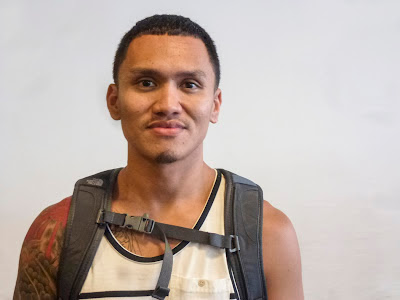 According to the National Weather Service, about 25 million lightning flashes occur each year in the United States, each one potentially deadly.

In Ryan Gerald del Castillo’s case, on July 26, lightning struck not him, but the roof of his seven-story Brooklyn apartment building, setting off a massive 7-alarm blaze. The fire raged through the building, ultimately forcing him out of the second floor apartment he’d lived in for nearly 17 years, since he’d emigrated to the U.S. from the Philippines.

Because the building is so large, and because the fire started on the top floor, it was at least an hour—and possibly longer—before del Castillo, a nurse at the NYU Medical Center ICU in Manhattan, realized the extent of the fire and left for the safety of the street.

He explained that because he lives so close to at least two neighborhood hospitals, it’s normal to hear sirens—fire trucks, ambulances and alarms.

“You always hear something,” he said. “I didn’t really see smoke … I was nonchalant.”

Once outside, del Castillo joined his aunt, who also works as a nurse, but at Kings County hospital, and lives with her daughter on the building’s first floor. His aunt had called about twenty minutes after the fire started to make sure her nephew was okay and he’d assured her he was.

Now, watching as the flames covering the entire roof spread, del Castillo understood the true severity of the situation.

“I’m looking at the building with this blank stare,” he said. “It was overwhelming; it was traumatic. You can’t even talk.”

He and his aunt decided to visit the Red Cross reception center set up at a nearby school for assistance.

“We needed someone to comfort us,” he said. “The Red Cross volunteer was helpful and friendly and asked how we were doing. You feel horrible, and they’re there to listen a little.”

Although he and his aunt declined emergency housing from the Red Cross, he said they were extremely grateful for the assistance they did receive.

“I’m so appreciative of the Red Cross,” he said. “They were helpful with what to do next. Me and my aunt are thinking of volunteering after we get settled. It’s not just the physical help they give; it’s the emotional help that people need.”

Email ThisBlogThis!Share to TwitterShare to FacebookShare to Pinterest
Labels: Brooklyn, Disaster Response, Down the Street, Fire