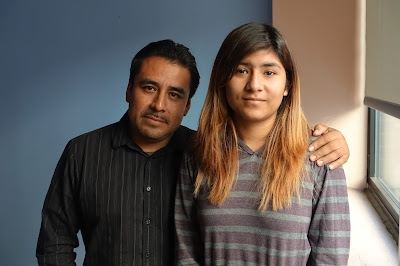 In early October, after their Borough Park apartment was destroyed by an explosion in a neighboring building, the Torres family suddenly found themselves homeless. Standing on a nearby street corner, Salvador Torres, a father of three, wondered how he and his extended family that lived next door were going to cope. That’s when they were approached by the Red Cross.

Prior to the explosion one of Salvador’s three children, 14-year-old Jeanette, was having a fun afternoon with friends at home practicing dance moves for her upcoming Sweet 15 birthday party. Suddenly, they were shaken by a loud noise. After looking out the window and seeing the building facade collapsing nearby, they quickly evacuated.

To everyone’s relief, the family all made it out safely, but they knew they had lost everything.

“We didn’t know where we would be living,” says Salvador.

As they began to process what happened, the family met with Red Cross volunteers who reassured them that everything would be OK.

“We feel a warmth when talking to them,” recalls Jeanette. “We could tell they really felt bad for us and wanted to help.”

The Red Cross initially offered them temporary shelter at a local hotel and money for food and clothing to help minimize the impact of such a life-changing event.

Along with the Torres' and their neighboring family members, the Red Cross assisted six other households left homeless by the explosion. Sadly, two individuals lost their lives in the disaster.

A few days after the tragedy, the Torres’ visited the Greater NY Red Cross headquarters in Hell’s Kitchen to meet with their caseworker Lilliam for additional assistance which included referrals to longer-term housing with a City agency and school supplies for the kids.

The road to recovery will be difficult for the Torres family. But as they begin to rebuild their lives and cope with the trauma, they know they can rely on each other to help move forward. Thankfully, Jeanette’s upcoming Sweet 15 party is still planned for November 28th and will prove a comforting opportunity to gather with family and friends.

Celebrating with their loved ones will be a reminder of the support they received following this disaster, an opportunity that may not have been possible without their new friends at the Red Cross. But to Salvador, they're more than just friends.

As he says, “The Red Cross is like a family you can trust with anything.”