The American Red Cross is excited to be featured in scenes in the upcoming Warner Bros. Pictures’ and Village Roadshow Pictures’ feature film SULLY. It recounts the story of the pilot who heroically landed U.S. Airways Flight 1549 on the frigid Hudson River in early 2009. The movie; directed by Clint Eastwood and starring Oscar winner Tom Hanks as Captain Chesley “Sully” Sullenberger; premieres in theaters nationwide September 9th! The American Red Cross is proud to be a partner of this film which, in part, honors the bravery and dedication of all our volunteers in New York City and around the country who give of themselves to provide these services every single day.

Among those who supported the Red Cross response to the landing of Flight 1549 on the Hudson River and who also reenacted that role in the movie SULLY was Chris Mercado. A few weeks ago we caught up with Chris to discuss both experiences. 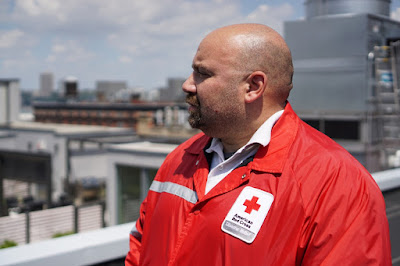 The first thing that came to mind was that a lot of lives were going to be lost and that we were going to encounter a tremendous amount of trauma. I immediately began organizing teams, quickly giving instructions and within 90 seconds I was heading to the scene.

I received the first ferry that arrived. We immediately started to support the passengers and crew members in whatever way we could, including physical and mental health assistance, as well as spiritual care. The vast majority of passengers weren’t even wet (aside from their feet). How does a plane with about 150 passengers land in the middle of a body of water and the passengers don’t get wet? I had a picture of what I thought the needs would be and the reality was that they needed socks and blankets. As a medical professional, I was concerned about frostbite because there was snow on the ground and the temperature of the water was extremely cold. Another thing I won’t forget was the immediate need everyone had for cell phones. Everyone wanted to call their loved ones and tell them, “I’m okay.” All first respondents, including Red Cross volunteers lent passengers their cell phones.

I felt privileged and proud to be part of a motion picture. Beyond that, since I was present at the Piers six and a half years ago, the crew wanted to take a lot of what I felt and saw and incorporate it into the scene making it more life-like and actual to the events of that day. They made me feel like that was extremely important to them and that I could be instrumental in helping them understand how the response was orchestrated and how we incorporated our services into City's overall response. It’s uplifting that they worked to portray the scene as accurately as possible.

How similar was the film shoot to the scene in 2009?

I was doing the same function. I was one of the Red Crossers present as people were coming off the ferry; helping by providing blankets. I think that was one of the most important aspects of our relief efforts because it shows how quickly the Red Cross responded, how involved we were and how the shoot stayed true to the services we rendered that day. We received the passengers so they’d immediately have someone at their side to help them. Something I saw in the shooting and what I hope makes the final cut was that the crew just wanted to know about the passengers and make sure that they were OK. That was very true to the mindset of the crew that day. They were concerned about whether everyone was rescued. There was no budging until they had reassurances. They only settled down when they knew no lives were lost and everyone had been helped. That’s something I saw in the scene I took part in when Sully got off the ferry and immediately asked about the crew and the passengers.

Posted by nyredcross at 9:08 AM