The American Red Cross is excited to be featured in scenes in the upcoming Warner Bros. Pictures’ and Village Roadshow Pictures’ feature film SULLY. It recounts the story of the pilot who heroically landed U.S. Airways Flight 1549 on the frigid Hudson River in early 2009. The movie; directed by Clint Eastwood and starring Oscar winner Tom Hanks as Captain Chesley “Sully” Sullenberger; premieres in theaters nationwide September 9th! The American Red Cross is proud to be a partner of this film which, in part, honors the bravery and dedication of all our volunteers in New York City and around the country who give of themselves to provide these services every single day.

Among those who supported the Red Cross response to the landing of Flight 1549 on the Hudson River and who also reenacted that role in the movie SULLY was Dottie Brier. A few weeks ago we caught up with Dottie to discuss both experiences. 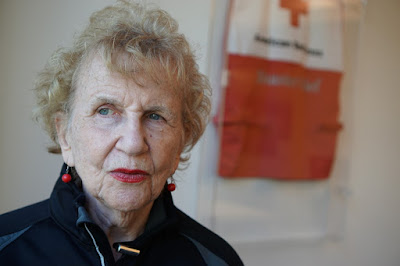 As a Red Cross volunteer I had previously responded to Flight 800, the Swiss Air crash, the Egypt Air crash and smaller plane crashes. They were all fatal. There were no survivors in any of those plane crashes. So it was unbelievable that everyone had survived. I remember being shocked and thinking what a terrible experience it was to go through even though everyone lived.

My role was disaster mental health. The Mental Health Services program provides mental health counseling as needed to people affected by disaster. We offer short-term counseling right at the time of the disaster to help people cope with their reactions to a devastating situation. The emotional aspect is a very important part of a response to an emergency. In 2009, I went directly to the hotel in Queens [to the Family Assistance Center] where the passengers and crew members were taken. I worked with the survivors who were there to support whoever wanted to talk with us so they could express their feelings and get validation that what they are feeling was expected following a traumatic experience. It’s very helpful for people to be able to talk [following a disaster] to someone who will listen with great interest and compassion.

I was delighted that Red Cross was being included along with the emergency responders because we are a very important part of the response for people affected by disasters. Being with the group of other Red Cross volunteers was fun. It instantly brought back the memories of that day and the mixed feelings of sadness that people felt because the emergency landing happened, but also relief that everyone survived. I found it exciting to be an extra in a film with Tom Hanks and Clint Eastwood. Plus it was interesting to see how much goes into filming a movie. It was hard work! We spent the whole day there in the pouring rain re-doing the scenes over and over again. We’d take Red Cross blankets, run up to the people coming off the rescue boats, walk them through the pier and then fold the blankets to start again.

Posted by nyredcross at 9:09 AM