The American Red Cross is excited to be featured in scenes in the upcoming Warner Bros. Pictures’ and Village Roadshow Pictures’ feature film SULLY. It recounts the story of the pilot who heroically landed U.S. Airways Flight 1549 on the frigid Hudson River in early 2009. The movie; directed by Clint Eastwood and starring Oscar winner Tom Hanks as Captain Chesley “Sully” Sullenberger; premieres in theaters nationwide September 9th! The American Red Cross is proud to be a partner of this film which, in part, honors the bravery and dedication of all our volunteers in New York City and around the country who give of themselves to provide these services every single day.

Among those who supported the Red Cross response to the landing of Flight 1549 on the Hudson River and who also reenacted that role in the movie SULLY was Sally Phipps. A few weeks ago we caught up with Sally to discuss both experiences. 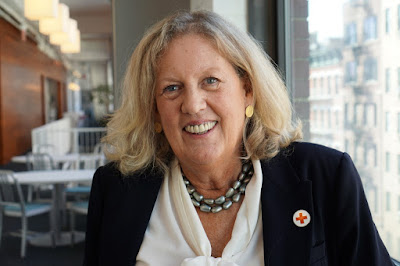 This was the third transportation incident I had responded to since my arrival at the Red Cross. I originally joined the Red Cross after the Flight 800 crash in 1996. The media coverage of this tragedy showed Red Cross volunteers with their arms around people. I was moved and knew it was something I’d like to do, a way to give back. I went into this response thinking the results were going to be the same as the other two plane crashes where there was loss of life. To go and see the passengers get off the ferry safely was amazing!

At the time, I supported our Chief Response Officer, who then sent me down to the Piers. I initially oversaw the passenger area for the Red Cross at the Piers. I also worked with passengers who did not have a place to go that night. They were taken by bus to a hotel near the airport. About ten days after the flight went down, my cell phone went off in a meeting. It was a man whose wife was on the flight. He explained that I had given his wife my phone so she could call to tell him she was safe and that was the first time he knew she was alive. I was so moved. It was an extraordinary testament to what the Red Cross does for people during some of their hardest times. Normally after an incident like this, you get very close to people but then you never see them again and you don’t necessarily know what happened. It was great because I was able to see how she was doing. Something else that struck me was the calm and composure of the pilot walking through all the chaos of the response.

How similar was the film shoot to the scene in 2009?

One similarity was that it was chaotic. There was a lot going on and Clint Eastwood had a stillness to him throughout all this chaos – whatever he’s focused on, he’s focused on.

It was fascinating; a real honor to be asked. It brought back lots of memories. It was an opportunity to bond in a completely different way with fellow Red Cross volunteers and share our memories. Quite frankly, it was fun because I had never been given the opportunity to be on the inside of a movie and actually participate. We were called the “real people” by everyone on set.

Posted by nyredcross at 9:08 AM