Brian Gerber Shares a Snapshot from the Field 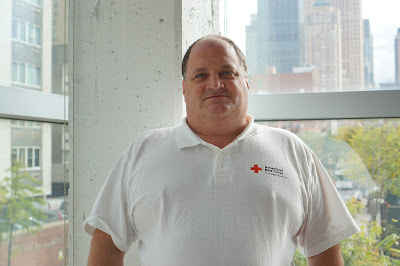 Brian Gerber, a Mass Care Program Manager for the Metro NY North chapter, has a truly amazing story. His first experience with the Red Cross came when a townhouse exploded in his community of West Haverstraw, New York. As a board member for the homeowners association of Village Fairgrounds II, he worked closely with the Red Cross to provide relief and care for those who were struggling after the explosion. By seeing the impactful ways that the Red Cross was able to assist his loved ones and community, Brian decided to become a volunteer himself. That decision allowed him to go down an entirely new path, as he would then spend many nights volunteering to assist in local emergencies within the Metro NY North area. After devoting his time for almost five years as a volunteer, he went through a week of swift transitions. He was hired as an employee, and was deployed just four days later to assist in the immediate relief for South Carolinians after Hurricane Matthew. Despite being so new to his position, he rose to the challenge of coordinating mass care for thousands of people in need. He took some time to sit down with me and share his fulfilling experience over the course of his 16-day deployment.


What was it like transitioning from a volunteer, to an employee, to a deployed staffer?

“Being immersed into the deployment was very different because I’ve done local disaster relief operations, but never going outside the area. But I have such good rapport with the volunteers because I had worked with them for so long that it felt no different [being an employee]. There’s a very big amount of respect. Even as staff or as a volunteer, you have to do what’s best for the client. And that’s how a lot of us feel, so it makes it very easy to transition.”


What was your role while you were in Myrtle Beach, South Carolina?

“Well I actually deployed as an Emergency Response Vehicle team member. When I got down there they heard that I was Mass Care Program Manager, and [since] they needed a Feeding Lead for the district, immediately I got pulled off [that team] and I got put into the District Office as the Feeding Lead. We had two kitchens that were being run by the Red Cross, and the Southern Baptists were doing the cooking for us.”


What were you seeing/hearing while you were there?

“The first days were very busy. [We were] making sure people had shelter, opening and closing shelters very rapidly, so the feeding needs were changing very quickly. A lot of people were in homes that didn’t have power, but people don’t always want to leave their homes, so we were making sure they had the essentials, that they had food. We were providing two hot meals a day, both lunch and dinner. It was a very logistical operation, making sure routes were done and working very closely with partner organizations. We were very close with the Salvation Army there because they were also helping to feed people; so we were making sure we weren’t duplicating their routes. Our numbers got up to almost 10,000 servings per meal period: one kitchen was making 3,500 and the other was making 6,200. It was an interesting operation to see: the moving pieces that all have to be made sure they’re working together.”


Were you able to see any improvement in the conditions from the day you arrived to the day you left?

“The first week was very hectic. But after that it was like everything fell right into place. It settled down and we got into a good flow and a good routine. By the time I left, we had already closed one of the kitchens, and we were getting ready to close the second one due to the power being back on in almost all the areas. Certain areas that had severe flooding still didn’t have power, but those people were living in shelters so we could then switch to catering feeding. Because once the number of people in need comes down low enough, you don’t need the capacities of the kitchens, so it’s easier to do local catering.”


Is there any particular person you met, or experience you had that touched your life in a meaningful way?

“I think the way that the group of us in the District Office came together as a team. We had people from Wisconsin. We had people from Utah. So all over the country. We didn’t know each other, we had never worked together before, and within 48 hours we were one cohesive group. [Because of] the comradery, and the support we were able to give each other, I still keep in touch with everyone…I got to say [the experience] is emotionally fulfilling. You walk into a shelter and you give out little Mickey Mouse dolls. The kids are so appreciative. And the parents are appreciative because now their kids have something tangible to hold on to.”


What do you think people should know about the conditions that are still going on in South Carolina?

“The biggest thing is that there were a lot of homes that got destroyed due to flooding. The flooding of the rivers was very big down there; they had floods that they had never seen before. And they went through this a year ago, so some of the same communities that were just starting to rebuild got re-impacted. The biggest thing was our caseworkers being out there and listening to their stories, because their needs are going to be long-term. It’s not going to be fixed in a day, week, or month but it’s going to be another year that people are going to be recovering. So there’s a lot of work that’s still left to be done; when I left our district was still fully functioning.”

A big thank you to Brian for upholding what it means to be a Red Crosser, and for taking the time to share your thoughts with me.

Posted by nyredcross at 5:02 PM