Notes From the Field: Haiti

Tiara is part of a small, highly-trained group of American Red Cross staff members who have traveled to the Caribbean nation following last month's historic storm to lend their humanitarian relief expertise in areas such as emergency distribution and telecommunications support. She joins a permanent team of American Red Cross staff members in Haiti (majority Haitian nationals), thousands of Haitian Red Cross team members and other Red Cross partners from all over the world.

We recently caught up with Tiara and discussed her experience in Haiti so far. 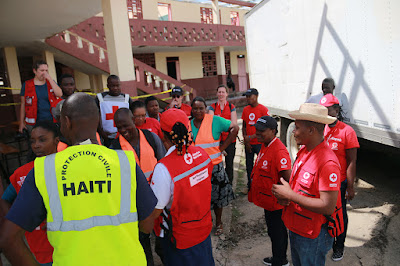 Can you talk a bit about the drive from Port-au-Prince to where you are now working in the South?
We left from the capital to the southern peninsula at 4am so it was dark for the first half of the drive. I did not start getting a feel for the surroundings until we were already in the southern departments [the areas most affected by the storm]. There was definitely damage to the infrastructure and a few bridges were out but it wasn't until I got out to the more remote areas that I saw the extreme damage caused by Hurricane Matthew.

Can you talk a bit more about the damage in areas you have worked?

Where we are based in Les Cayes there is damage to the roads and some buildings, however a majority of the damage I saw was in the small villages along the coast. Whenever it rains the roads turn into rivers and access is very difficult. Out in some of the heavily-hit communes the homes are completely destroyed with only a few studs remaining. Even bridges and some of the more sturdy hotels suffered severe damage, so you can imagine what the damage was to the smaller homes. Those that did not completely lose their dwellings usually lost part of their roof in the storm. The other devastating impact of the storm is the loss of crops and livelihoods (boats for fishing, stands for trade/selling, etc).

Walk us through a “typical” day.

We start off by heading out to different localities in the Sud Department where assessments have been completed, and we meet with the local leaders and the local Haitian Red Cross coordinator to distribute vouchers. We then visit the distribution site and plan out how we will run the distribution from that location. This includes determining what supplies we will need at that particular site. Once everything is set up we head back to the office to plan for the actual distribution which generally takes place the following day.

On a distribution day we get up very early to load the trucks and head out to the site before the streets are crowded. Distribution days are long and hot but very rewarding.

On days when we are not planning or distributing, there is a lot of running around. This includes organizing the warehouses, completing inventories, working on plans, dealing with the transition of team members, and figuring out the logistics of our office space, residence, etc.

Can you discuss the relationship between the American Red Cross and the Haitian Red Cross? 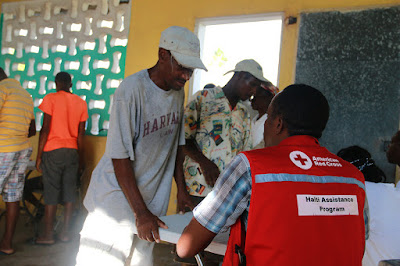 Can you talk about some of the recipients of Red Cross supplies that you have met?

One of the conversations that stood out the most to me was with a man from the south coast who lost everything he owned. He had four children and made his living as a fisherman. His whole household had to move into a tiny section of their home that still remained and he was trying to figure out what to do in order to continue making a living. Even in his difficult situation he was out helping his neighbors rebuild and was helping people carry the items that they had received at a distribution site. One of the things I have really come to understand is the resiliency of Haitian people; they have all started rebuilding. There is still a long way to go but it is heartening to see people move forward and work together.

What has surprised you the most so far?

As my first international deployment for the Red Cross, one of the most eye opening things for me has been to really fully understand the network that the global Red Cross has and how deep it reaches into even the most remote places. Rather than coming in as a complete outsider, the Red Cross is able to reach the most isolated places because of its local base. 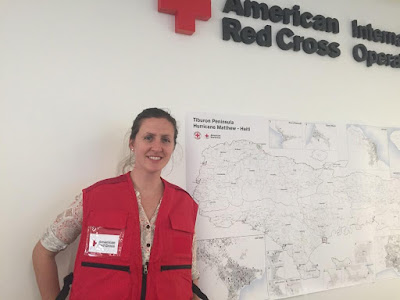 What does it mean for you personally to deploy?

For me, I am here to serve. I am here to help in whatever way I can and do my best to ensure that help is going to those who need it the most. I am representing not just the American Red Cross but the larger Red Cross network. In the context of Haiti there is already a delegation out here filled with smart and capable individuals who are really running the operations. I am here with my team to help with relief planning and logistics in every way we can. [The days] are hard and long but getting to be a part of this complex team has been incredibly rewarding. I am excited to see all of the great work that is being done on the ground, which will continue well after my team departs.

On October 4, 2016 Hurricane Matthew made landfall on the country’s southern coast as a Category 4 storm, the largest to hit the country in 50 years. Matthew’s impact, Haiti’s worst disaster since the 2010 earthquake, has been devastating: widespread flooding, high winds and a massive storm surge have destroyed infrastructure, crops and livestock and left hundreds dead and tens of thousands homeless. According to the UN, 1.4 million people are in need of humanitarian assistance.

With a permanent team in Haiti of nearly 200 staff, more than 90% of whom are Haitian nationals, the American Red Cross has been working with the Haitian Red Cross and other local and international partners in Haiti since before landfall to mobilize resources and provide critical relief and other vital logistics support. This includes the delivery of lifesaving supplies (soap, water purification tablets and rehydration salts) and door-to-door outreach to address the deadly spread of cholera. This work will continue for weeks and months to come.

To learn more about the work of the American Red Cross in Haiti, visit www.redcross.org/haiti.