My Early Morning Ride-Along with the Red Cross


Since the beginning of my internship at the American Red Cross in Greater New York, I wanted to have the opportunity to go out in the field and see the work of the Red Cross firsthand. As a communications intern, I wrote about the people we help and the work we do and felt the need to see that work in action. Towards the end of my summer at the Red Cross, that opportunity came. Below I documented the experience. 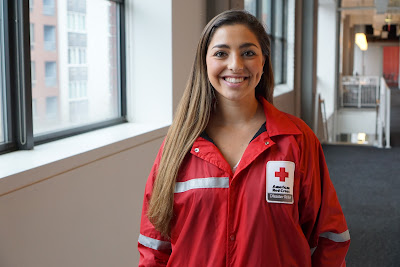 On a recent Thursday morning I walked into the Red Cross at 5:45am – a bit early for my 6am ride-along call time. From 6am – 2pm I would be working with the Disaster Response team ready to dispatch for a fire, vacate, or other emergency. We wasted no time. As soon as my team lead arrived at 6am, we were dispatched to our first incident – a fire in Queens. We grabbed our gear and hopped in a minivan bearing the Red Cross name and logo. Lucky for us, we were on the road to Queens in the early morning hours before too much traffic could accumulate on the highway.

The fire we were responding to had been called in at 5:15am, so by the time we arrived around 6:45am there were no fire trucks or emergency vehicles remaining outside the residence. The residents of the home were sitting in their neighbor’s courtyard when we arrived, having had time to process what happened. One gentlemen allowed us to enter the home with him to do a damage assessment. Most of the fire damage was on the first floor where the fire started, which was vacant, and the man’s dwelling on the second floor was largely unaffected aside from the smell of smoke. We spotted one broken window, which had been intentionally broken to facilitate air circulation, and noted that in our assessment. The resident provided his and his family’s names but declined assistance. Nevertheless, we ensured that he had the Red Cross phone number in the event he had any questions or needed help.

And just like that, after about 25 minutes, we were back on the road to the headquarters. We knew our next assignment would be a vacate in the Bronx scheduled at 10:00am, and having no prior knowledge of what a vacate consisted of, I did not know what to expect. We arrived to a chaotic scene with about six residents standing outside an apartment building, visibly agitated and upset upon receiving news that they were being forced to leave their home. What I was told is normally a straightforward dispatch turned out to be a two-hour job.

Not only were there six residents out on the street, but there were also five officials from different agencies there to inspect the building, which added to the complexity of the situation. Understandably so, residents were vocal in expressing their anxiety. One woman expressed her frustration with the landlord and her living conditions to me as her voice escalated. But she stopped herself to say, “I’m sorry I shouldn’t be laying this all on you. I love the Red Cross. They’re all about comfort.” And that’s when I realized how important it was for us to be there during this difficult time for the residents because they were confused, helpless, and in need of someone to console them and provide assistance.

With six residents being forced from their home, we had a lot of paperwork, coordination, and explanation on our hands. We were able to set five residents up with a hotel stay in the NYC area they requested and provided each with emergency funds. One gentleman, who was expecting to move into the building on the day of the vacate, opted to stay with a friend rather than accepting a hotel stay, but we provided him with referral information.

It was difficult trying to comfort those who were being vacated by no fault of their own – people who had lived in the building for years and had nowhere else to go. They were told they have thirty days to remove their belongings from the building and would not be able to spend the night there, so they were forced to pack up the things they would need for the next few days.

One elderly woman, who spoke little English and held back tears throughout the entirety of the vacate, was struggling to carry the items she had packed up in two grocery bags and a zipper bag while balancing her cane in her arms. To help her get to her hotel, we drove her to a nearby subway stop with an elevator. It was heartbreaking to watch her walk off after the home she had known for three years had been taken away from her, but I found comfort in knowing that a caseworker at the Red Cross would be able to help her develop a recovery plan and figure out next steps.

As we drove away back towards our headquarters, my team lead instructed me to call the Emergency Communications Center (ECC) to provide a final update on the services we provided. I notified them of the hotel stays, cash assistance cards, and referrals we provided, and the case was officially closed. With only one hour left in my shift by the time we returned to the office, I wasn’t expecting for us to be dispatched again. Volunteers on the 9am-5pm shift had already been sent out on another vacate and were prepared to respond to subsequent disasters. Instead, I sat in the responder area of the headquarters and reflected on the families and people we were able to help in a short seven-hour window, realizing just how vital Red Cross volunteers and services are to those who live in NYC.
Posted by nyredcross at 10:24 AM