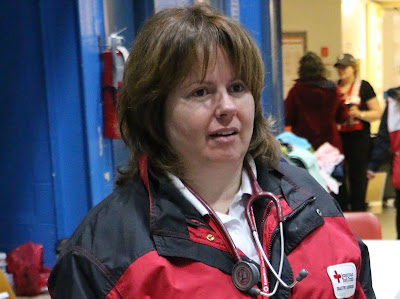 Hayden was a passenger on the Hempstead line of the LIRR on her way to work at the Greater New York Red Cross HQ in Manhattan when the conductor announced a delay due to a medical emergency.

“The conductor asked if any health professionals who can provide assistance would please come to the rear car,” said Hayden. “I didn’t have to think twice.”

Coincidentally wearing her Red Cross shirt, Hayden quickly stepped off the train and walked down the platform to the rear car, joining two nurses who also stepped in to help. They found a man in his late 20s slumped in his seat and unresponsive.

Despite the tense situation, Hayden remained calm as she kneeled next to the man alongside the two other nurses.

“We checked for his pulse. He had none, he wasn’t breathing, and he was blue. I looked at the two other nurses and confirmed we should do hands-only CPR’” said Hayden. “They agreed and one nurse immediately started compressions.”

After about two minutes of hands-only CPR, they saw a slight movement and paused compressions.

“It was just a little bit of movement that gave us an indication and his color improved,” said Hayden. “At that point we found a pulse. It was so amazing.”

Hayden and her fellow responders moved the man into a recovery position and monitored his breathing and color until emergency medical services arrived on scene. Without immediate CPR, the man might not have survived.

“At a minimum, familiarize yourself with hands-only CPR because it’s easy to learn and it works,” said Hayden about the importance of knowing this lifesaving skill.

Debbie Hayden started as a volunteer nurse with the American Red Cross on Long Island eight years ago and has been serving as the Greater New York Red Cross Regional Health Services Manager since January 2017.