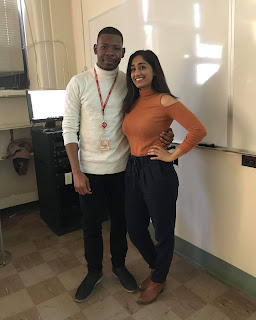 When Mahita Bandlamudi and Courtney Chambers first arrived at Hunter College in 2016, they had no idea how intertwined their college experiences would turn out to be.

Both were Human Biology majors with pre-med aspirations. Both were also intrigued at the prospect of giving back to their communities and began to look for opportunities to do so early in their freshmen years.

Now, as they prepare to graduate, they’re concluding their one-year tenures as co-presidents of the Hunter College Red Cross Club, which has blossomed into one of Hunter’s largest student organizations in the past couple of years.

“I was actually in a Red Cross club at Bayside High School, and I joined that when I was 14 or 15,” said Bandlamudi. “I stayed active throughout my high school career in that club and got to serve as president, and then I came to Hunter and joined as well. I’ve basically been a part of the Red Cross for almost seven years now.”

On the other hand, Chambers came to the United States from Jamaica when he was 15, and while he didn’t have a Red Cross club to join in high school, he was introduced to community service through local organizations. When he entered Hunter, he instantly knew that he wanted to be involved with the club.

“I actually joined the club three days into college, and since then, I’ve been so motivated!” said Chambers. “In September of 2016, I was named the “Head Volunteer of the Month,” and from there, I motivated myself to work my way up.”

Both students have dedicated themselves to making the Hunter Red Cross club as engaging as possible. This year, there was an emphasis on participating in new Red Cross programs, such as the Home Fire Campaign and the Missing Maps program.

“In January, we had 60 volunteers spend time around the boroughs installing smoke alarms. “That day we installed over 300 of them” said Chambers. 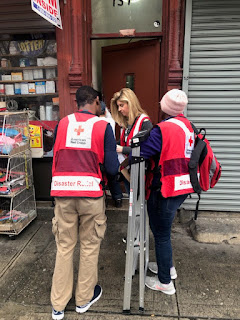 Both Bandlamudi and Chambers give a lot of credit to their executive board and Red Cross staff members for helping facilitate events and experiences for club members.

“The board is made up of 21 club members who show a lot of dedication and effort towards the club over time, and none of this would be possible without them” said Bandlamudi.

“We’re also truly thankful for the [Red Cross] staff members. They make time for us and help guide us through this entire process,” said Chambers.

Unfortunately, with the emergence of COVID-19, Mahita and Chambers have been forced to wrap up their academic years at home. Nonetheless, they have adjusted accordingly, ensuring that members still have opportunities to perform volunteer work.

“For the most part, we have canceled all in-person events,” said Chambers. “However, we have a few volunteers who participate in the Food Distribution project with the chapter; otherwise, we’ve been engaging with other online projects like Missing Maps.”

Aside from their work with the Red Cross, both students also have their post-graduation plans in their thoughts. Before the outbreak, Chambers was planning on doing either EMT or clinical research, while Bandlamudi was looking to work as a clinical research coordinator or at a primary care office. Now, they head into the future with a bit of uncertainty, as every college graduate seemingly will. However, there is no doubt that both of them will succeed at whatever they choose to pursue.

Although Bandlamudi and Chambers will not have the chance to walk across a physical graduation stage, they’ve certainly earned a massive round of applause from the Red Cross. Through their unwavering commitment to the Red Cross over the past four years, both students have displayed their love for making a positive impact on everyone around them, and they’ll continue to do so for the rest of their lives.
Posted by nyredcross at 11:53 AM