March 26, 2021 Albany, NY – The American Red Cross in New York State today celebrated six state legislators for their distinguished efforts in the State Capital and their partnership with the Red Cross in their home districts.

“We are so grateful for the partnership we share with our legislators across the state. Their commitment to improve the lives of their constituents aligns with the Red Cross’ mission to prevent and alleviate human suffering in the face of emergencies. They each share in our humanitarian spirit and we are honored to recognize them for their efforts to help build more resilient communities,” said Mary Barneby, Kevin Coffey and Alan H. Turner II, the CEO of the American Red Cross Greater New York, Eastern New York, and Western New York Regions in New York State.

“It is a true honor to be recognized by the American Red Cross as a 2021 State Legislator of the Year. I am blessed to be able to partner with this great organization on their Sound the Alarm campaign to bring fire safety and fire alarms to my constituents, as well as helping to deliver boxes of food to the community. Helping people remain safe — especially during an  emergency situation — is one of the cornerstones of my job as an elected official. I look forward to continuing the great work that we do together,” said Senator Joseph Addabbo.

"I have worked alongside the American Red Cross countless times both as a New York State Senator and as a lifelong volunteer firefighter; and I am honored to be recognized by their organization in this manner. The Red Cross is the gold standard in relief and aid organizations, and I am grateful for our effective partnership. I look forward to continuing our work together in accomplishing our shared goal of helping those in need,” said Senator John Brooks.

"I am grateful to the American Red Cross for its dedication to our community and its willingness to partner with my office to better serve the residents of New York State.  I have seen, firsthand, the important work the Red Cross and its team does in responding to a crisis and helping those in need of immediate assistance.  I know that thousands of residents throughout the district have benefitted from the professional training, emergency preparedness and blood donations the agency provides.  I am proud to work with the Red Cross and to support its humanitarian mission.  Thank you for this special recognition," Senator Patrick Gallivan.

"To be honored by an organization whose own mission is so rooted in community service is truly humbling. The heroes at the Red Cross have long been a beacon of hope in the face of extreme emergencies here in the Hudson Valley and beyond, and we are grateful for their efforts and dedication. I cannot thank the Red Cross enough for the work they do, and for this honor, and I look forward to continuing our partnership to ensure that our neighbors in need always have a place to turn," said Senator Sue Serino.

"I was extremely devastated and heartbroken for the people of Puerto Rico when the island was so severely affected by Hurricane Maria.  It’s a place that is very close to my heart and seeing the devastation hit very close to home for me. There is still more work to be done in rehabilitating Puerto Rico but I am truly honored and humbled to receive such a prestigious award from the American Red Cross, an institution that has been at the forefront of disaster relief throughout the world. I look forward to continuing to work side by side with the Red Cross team to ensure that wherever there is devastation we are there to offer support,” said Assemblywoman Maritza Davila.

“I am honored to be recognized by the American Red Cross as one of its Legislators of the Year. NYS has faced its share of emergencies in recent years and the ARC is always there to respond to the unique needs of every resident dealing with disaster. The Southern Tier Chapter continues to be a reliable resource at a moment’s notice, helping my constituents recover from two historic floods and other crises. Working together, we have been able to help countless New Yorkers and I’m proud to be their advocate at the state level,” said Assemblymember Donna Lupardo.

About the 2021 State Legislators of the Year 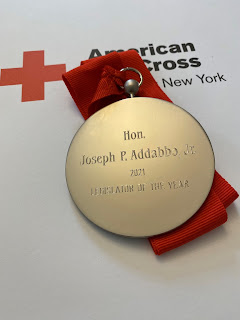 Senator Joseph P. Addabbo Jr. (Queens) was recognized in part for his efforts to aid residents whose lives were deeply affected by Hurricane Sandy in late October of 2012.  As a member of the Senate Bipartisan Task Force on Hurricane Sandy, Senator Addabbo worked to help his community recover and rebuild from the devastating storm.

Senator Addabbo also distinguished himself by partnering with the Red Cross to deliver food and essential supplies as part of a critical mission in Queens during the height of the COVID pandemic. Senator Addabbo worked alongside Red Cross volunteers to personally deliver boxes of fresh food to the some of the most vulnerable in our society.

The Red Cross further noted Senator Addabbo’s efforts to prepare his constituents for the event of a disaster by co-hosting a series of virtual Citizen Preparedness Corps emergency preparedness presentations, and promoting the Red Cross Home Fire Safety campaign by encouraging them to sign up for free smoke alarm installations. 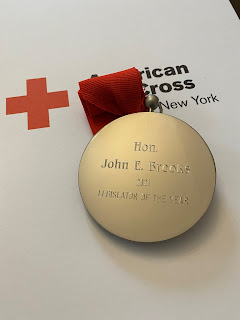 Senator John E. Brooks (Long Island), Chair of the Senate Veterans, Homeland Security and Military Affairs Committee, was recognized for decades of work to protect the people of Long Island.

For more than 50 years, Senator Brooks has been an active volunteer firefighter with the Seaford, Medford and Lindenhurst Fire Departments and previously served as Seaford Fire Chief.  Prior to Superstorm Sandy, Senator Brooks served as the Chairman of the Long Island Hurricane Symposium Program where he partnered with hurricane experts and the National Weather Services to evaluate risk on Long Island.

Senator Brooks also worked to better prepare his community in the event of disaster, by serving as a Red Cross Champion for the Sound the Alarm campaign on Long Island, and has co-hosted a virtual Citizen Preparedness Corps. emergency preparedness event, which helped to prepare residents for hurricanes, fires as well as other natural and man-made disasters. 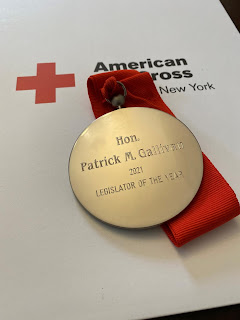 Senator Patrick M. Gallivan (Western New York), was recognized for his strong partnership with the Red Cross in his district as well as his distinguished service in the State Senate.

Notably, Senator Gallivan has hosted several disaster preparedness programs in his district helping to train more than 600 individuals through the Citizens Preparedness Corps program. Under the Senator’s leadership, schools in his district have also participated in Hands Only CPR, Prepare with Pedro and Pillowcase Project programs.

Prior to his election to the State Senate, Senator Gallivan served as Erie County Sheriff from 1998-2005, and before that spent 15 years as a State Trooper. Senator Gallivan is a graduate of both the prestigious FBI National Executive Institute and the FBI National Academy, and is a past member of the New York State Executive Committee on Counter-Terrorism.

Senator Gallivan has used his extensive background in law enforcement to help secure funding to provide Resource Officers to school districts and has supported community-based programs to combat domestic violence. 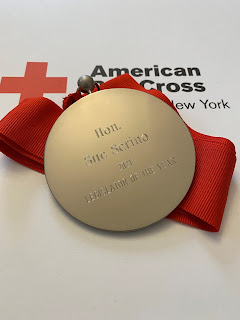 Senator Sue Serino (Hudson Valley) was recognized for standing shoulder-to-shoulder with the Red Cross during several major disaster response operations.  When her district was hit by two Nor’easter snowstorms, Senator Serino made sure her constituents knew where Red Cross shelters were located and shared timely and vital safety information to help people weather the storms.

And in October 2017, when fire ripped through the Rip Van Winkle Apartment Building and affected more than 400 individuals, Senator Serino was on the scene and took action to connect with community leaders throughout Dutchess County to help secure in-kind donations for the clients impacted by this fire. The Senator helped secure pillows, hygiene products for adults and babies, water, and critical supplies for displaced residents.

Senator Serino also hosted several youth preparedness courses in her district and helps lead outreach efforts in the community including using her social media presence to share the constant need for blood donations. 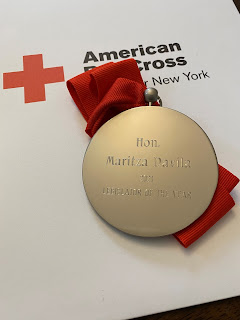 Assemblymember Martiza Davila (Brooklyn), was recognized for her efforts in the wake of Hurricane Maria, which devastated the island of Puerto Rico in 2017 and for working to prepare the residents of her district for disaster.

In the immediate aftermath of Hurricane Maria, Assemblymember Davila, a native of Cataño, Puerto Rico and the current Chair of the Puerto Rican/Hispanic Task Force, was one of the first people on the ground surveying and offering relief to the devastated island and its people. Providing direct information on the needs of particularly hard-hit areas, and working alongside the Red Cross, she was an invaluable partner for the Red Cross and her efforts resulted in more efficient and immediate service delivery to those in need.

Having moved to Bushwick in Brooklyn as a young girl, Assemblywoman Davila has also served as a Red Cross Champion for the Sound the Alarm campaign in Brooklyn, encouraging residents to sign up for free smoke alarm installations and helping protect community members from the dangers of home fires. 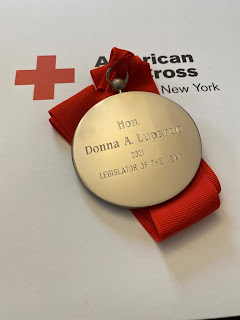 Assemblymember Donna A. Lupardo (Southern Tier), was recognized as a 2021 New York State Legislator of the Year by the American Red Cross for her ongoing support of the Red Cross and assistance during natural catastrophes the region has faced.

As the Chair of the Assembly Committee on Agriculture, Assemblymember Lupardo has prioritized food security for vulnerable populations, and for those effected by supply chain problems and job loss during the COVID pandemic. Assemblymember Lupardo has authored numerous pieces of legislation which were signed into law during her time in the state legislature earning her a well-deserved reputation as a tireless and effective leader.

Each year, Assemblymember Lupardo sponsors the designation of March as Red Cross Month in the State Assembly and she has served as member of Southern Tier Sound the Alarm.Save a Life. Campaign Cabinet for many years.  In addition, Assemblymember Lupardo was recognized for supporting Red Cross disaster preparedness initiatives and campaigns; helping to recruit new Red Cross volunteers; and promoting blood drives.

About the American Red Cross:

The American Red Cross shelters, feeds and provides emotional support to victims of disasters; supplies about 40 percent of the nation's blood; teaches skills that save lives; provides international humanitarian aid; and supports military members and their families. The Red Cross is a not-for-profit organization that depends on volunteers and the generosity of the American public to perform its mission. For more information, please visit redcross.org or cruzrojaamericana.org, or visit us on Twitter at @RedCross.

Posted by nyredcross at 1:24 PM