Philadelphia native Shonda N. Scott originally joined the American Red Cross as a volunteer with the Southeastern Pennsylvania Region. In 2019 she was hired as an employee and relocated to New York. Shonda works as the Mass Care Manager in the Greater New York Region. Her expertise is in distribution of emergency supplies, sheltering, feeding and reunification with additional expertise in operations management. 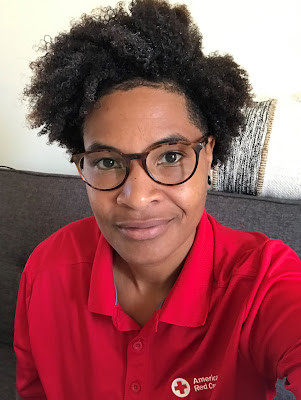 Why did you join the Red Cross?
In the early 2000s, I was an active volunteer with Community Emergency Response Team (CERT) and served as a paid-call firefighter. I stopped volunteering for a while to focus on college and working as a General Manager in the automotive industry. While employment was paying all my bills, I was lacking the feeling of fulfillment. In 2017, as a birthday gift to myself, I decided to sign up as a volunteer to help people that were affected by the many hurricanes that year. Two weeks after joining, I was deployed to Puerto Rico in Mass Care. I loved what I was doing so much, I volunteered there for almost four months. That experience was the reminder I needed to see that life is about more than how much money you can acquire, but how you decide to live your life. American Red Cross allows me to not only work but have that fulfillment I was missing before I left the automotive industry.

Where did you deploy last fall what did you find most meaningful about that experience?

My last deployment was to the California Wildfires in 2020 as the Mass Care Chief. I learned a lot during this operation that I can use when working local operations in New York City. I served with an amazing team and mentor. The most meaningful experience I left with was how supportive the entire team was to each other. We cross trained, we helped clients and we also staying safe during the COVID-19 pandemic.

Do you have one story you think of since joining the Red Cross that reinforces why you are here?

One day I was working to distribute water and food supplies to victims of Hurricane Maria. We were asking the residents to form a line to receive supplies when one resident warned us that a few gang members were present. I was the leader of the operation, so one of the members started walking towards me. I greeted him and he stated he wanted to help but didn’t know how. I passed him a case of water and stated, “start passing out cases of water to the people in line.” That day he became a volunteer and worked hard for his community. That’s what we learn in disasters. We learn who people are within their hearts. One of the best experiences I had there.
Posted by nyredcross at 11:27 AM