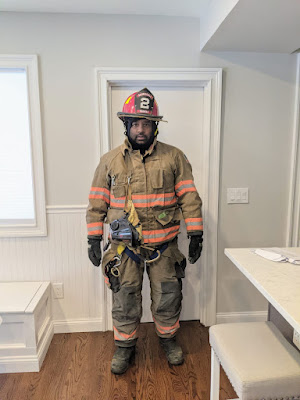 Prince Thomas feels a responsibility to help his community in times of need. This is what inspired him to start his journey as a volunteer with the American Red Cross. Prince, a resident of New Rochelle in Westchester County, joined the Metro NY North Chapter Disaster Action Team (DAT) in December of 2019. In addition to helping residents after local disasters through the Red Cross, Prince, a father of two young children, is also a volunteer firefighter in Scarsdale.

Why did you initially start volunteering as a firefighter and how did that lead you to the Red Cross?

One reason was that I wanted to do something steady in the community. Something that wasn’t just volunteering at a soup kitchen or at a food pantry here and there. I wanted something longer-term that I could do. And also, at that time, I had a federal job, so I had racked up a ton of vacation time. I had the time to go to the fire academy.

I've been a volunteer firefighter for about 10 years. [As firefighters] we go put the fire down and go home. I always wondered what happened after that, you know, what happens to the families after the fire. I remember one time at an incident…seeing the Red Cross people there. Then I was like, “Oh, what do they do?” Because in my mind the picture I had of the Red Cross at a fire was someone putting a blanket around you and giving you hot cocoa. I just thought that's what they did. I didn't know the other stuff they did as far as temporary housing and providing money and mental health services. And then I was like, “I didn't know that existed.” It was cool to see a fire full circle. There is a phrase we use at the fire department: if you see me as a firefighter, it’s probably the worst day of your life. But that's also true with the Red Cross. It's not under great circumstances. But hopefully we [Red Cross volunteers] could help you make it better.

What is the most meaningful part of volunteering for the Red Cross?

The most meaningful part of the job is connecting with people. After a fire, at the Red Cross, we’re talking to affected individuals, and half the time they’re still in shock...Half the time they’re just like “What’s going on?” They can’t process it. But I think also, it’s nice for them to be like “Oh, these people are here to help me.” It’s just that human touch for them that's a big thing.

And it's the little things. Going to a fire as a firefighter, I remember my instructor always told me, I should keep some Hot Wheels in my fire bag. If there were kids at a fore, I could give them out. I try to do the same for the Red Cross. We have Mickey Mouses that we give out, but I’ll also keep little fidget spinners and little coloring books with me… I keep that in my Red Cross responder bag and I feel like that has been helpful because these kids don’t know what's going on. Usually, they want me to explain to them what's going on because their parents are just rushing back and forth and figuring things out about their situation. A sense of calm is always big for them. 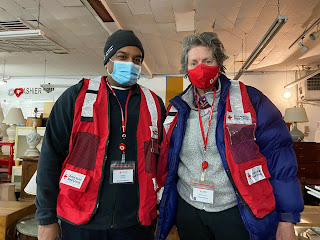 Prince (left) and a fellow Red Cross volunteer
What does the Red Cross mean to you, particularly as a father?

It has grounded me a lot. It’s given me a sense of purpose. It’s given me an appreciation for what I have. It also made me feel much more in tune with my community. And you meet a lot of cool people. A lot of people from different backgrounds. I’ve met are people who are volunteer EMTs or paramedics. And a few other volunteer firefighters. It’s been cool.

Being a father is so amazing. My kids, the older one especially, when he sees my Red Cross bag, he knows. He says: “Oh, Dad’s gonna go for a fire or something.” It's kind of cool to give him something to be like “when you grow up, you have to give back to your community.”
Posted by nyredcross at 1:46 PM