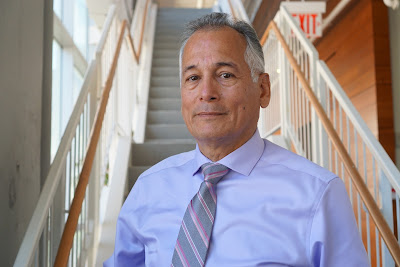 Carlos Blanco always dreamed of making a difference. And that’s exactly what he did for nearly three decades in the Army serving his country and helping others. But after an apartment fire in his Bronx home earlier this year, it was a team of Red Cross volunteers who were there for him when he needed it most.

During his nearly 30 years with the Army, Blanco experienced countless moments of sacrifice and service. He saw the suffering of others and says he needed to put aside all sense of fear and trepidation to fulfill his missions. He eventually worked as operations sergeant with the NY State Emergency Preparedness team and witnessed the effects of natural disasters firsthand including hurricanes Katrina, Rita and Wilma. And he says throughout it all he never felt afraid with his fellow members of the military alongside him.

After a medical incident sent him to the hospital in 2016, he emerged from that experience with new challenges. He was living alone and approaching retirement. He started to wonder what lay ahead. He embarked on this new chapter in his life at the age of 60 with the intent of reinventing himself, spending some time working with his church, maybe even starting a business within the Latino community of the Bronx where he’d lived for most of his adult life.

But all those plans were turned upside down the night of September 3, 2019 when he learned of an apartment fire in his home. Blanco himself was actually spending that night in nearby Westchester County watering plants and taking care of the home of a friend. He received a call in the middle of the night alerting him to what had happened - terror gripped his thoughts as he imagined his beloved pets trapped inside.

“I immediately thought of my little guys,” said Blanco, welling with tears. “I call them my three amigos.”

Those three amigos were his dog, Teddy, and two cats, Tigger and Simba. As with so many of our animal companions, they had become a stable force in his life; sadly they perished in the fire. For Blanco, it was an overwhelming emotional experience coupled with the loss of material items, his home and a sense of stability.

When he arrived at the house that morning he encountered the firefighters - but also some unexpected and entirely welcome guests from the Red Cross.

“Well, you know, I didn’t have to call the Red Cross - they were there,” said Blanco. “Knowing that in times like this - you feel like you stand alone. And what am I going to do, where am I going to live. And here they are.”

He says he was provided everything he needed in a time of crisis - shelter, some funds on a debit card to buy clothes and food, and unwavering support to help him move forward.

“People don’t even know how important an organization like the Red Cross can be,” said Blanco. “And what it represents - during people’s worst time - basically is hope. They don’t care who you are - they just know you need help.”

Blanco is now rebuilding and moving forward with a renewed sense of optimism - appreciative of everything he has in life. And he’s ready to pay it back to others; he says a priority is now completing an application to become a Red Cross volunteer himself.

“I know I can make a difference,” said Blanco. “Because they made a difference in my life.”
Posted by nyredcross at 11:04 AM