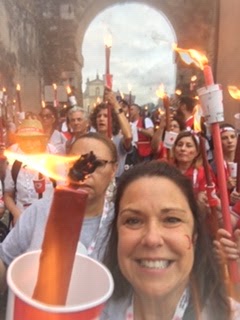 Slumbering in the Italian countryside, nestled between rolling hills of vineyards and lakes, lies the sleepy town of Solferino. Like most towns that dot the Italian countryside, Solferino would not attract many visitors, being bypassed for its larger nearby cousins of Verona and Lake Garda. Yet, what makes Solferino stand apart from its rural neighbors is an infamous event that took place on June 24, 1859 that changed the course of world history. A heady reputation afforded Solferino that most people, including many Red Crossers are largely unaware of, that I myself was unaware of until I traveled to Solferino, Italy as part of an unofficial American Red Cross delegation.

Since 2009, thousands of International Red Cross and Red Crescent members converge to celebrate the largest spontaneous humanitarian effort during wartime; and to celebrate the subsequent birth of the Red Cross and Red Crescent Societies and the formation of the Geneva Conventions which sets forth guidelines for the treatment of prisoners, wounded armed forces, and civilians during wartime engagements. Solferino is where the “idea began.”

Henri Dunant witnessed large scale casualties suffered by all countries represented in the conflict during Italy’s struggle for independence. Inspired by the village women from the area who carried water from the village down to the battlefield, and wounded soldiers several miles to nearby churches for medical treatment, Dunant joined their effort. Using his own money Dunant hired wagons, food and medical supplies engaging nearby towns in the relief operation. Dunant also helped convince army leaders to release all medical professional prisoners allowing them to assist the wounded, regardless of the uniform they were wearing. Due to the sheer number of casualties, the military leaders agreed. Thus, Dunant established the first humanitarian relief effort that did not discriminate on the basis of country, culture, race, or religious affiliation during wartime. Upon his return to his home in Geneva, Dunant went on to publish “ A Memory of Solferino” with his own money, and began a series of discussions which led to the establishment of the Geneva Conventions, and the signed treaties with many nations who agreed to follow Dunant’s principals. Dunant proposed the establishment of a voluntary relief organization that would carry out this treaty; whose sole mission was to alleviate the human suffering imposed by war, conflicts and natural disasters without discrimination based on borders, race, gender or religion.

Henri Dunant’s financed his passion for this cause using personal finances. He went bankrupt yet still published essays persuading a humanitarian agenda for the fair treatment of prisoners of war, abolition of slavery, protection of jewish exiles and a neutral international organization to oversee this all. In 1895, Dunant’s writings were “rediscovered” sparking a renewed interest in his work on a global scale, leading to Dunant being awarded the first Nobel Peace Prize for what is described as “the supreme humanitarian achievement of the 19th century.”

Fast-forward to today when thousands of humanitarians come together in the foothills where this battle took place to honor the great man, his work, and the ongoing relief efforts of the societies, Red Cross and Red Crescent, that he helped create. To be a small part of such a great legacy can not be fully explained in words. Honored to be part of this celebration does not adequately fill out the experience. I will offer some insight fully acknowledging my lack, but hopefully fleshing out enough details to provide a glimpse into this celebration’s meaning.

Meeting in the town’s piazza, celebrants come together. From a single torch, the light of the flame is passed from each participant until nearly ten thousand torches are lit. With each lighting, we are joined together in unity; passing on the symbol of hope and promise that our societies represent around the world. The light is shared shoulder to shoulder with soon to be new friends represented by almost 150 countries. I was one of about a dozen Americans from the mainland joining another dozen plus Americans stationed in Venice, Italy. With torches held aloft we began the same procession that the villagers took when they came to aid the wounded combatants that fateful day centuries ago. Winding our way through the countryside we walked shoulder to shoulder with Nationals from around the world. Conversations ensued, shirts and pins were exchanged, occasionally a song broke free from the crowd. Singing “Let it Be” with accents from around the globe made this rendition my favorite forever. Let it be. A simple message; let it be- a promise of peace, unity, safety in one’s own country, a promise that every human being is a human being deserving what we each strive for; dignity, clean water, a safe home, no migrant crisis, no world disasters… let it be.

We walked on for over ten miles. Sometimes a hush would come over the crowd. Was it the beauty of the sunset and the glow of torches that wrapped around the winding lanes for miles that brought the throng to quiet mullings? Was the enormity of the experience and the sheer joy of being a participant? Was it the humble thoughts on being a part of the greatest humanitarian relief organization in the world? Was it simply walking beside someone from another nation knowing that due to politics our countries had been in conflict, or were currently in conflict, yet here we walked connecting as citizens of the world believing in something greater? Or was it the knowing that death had devastated this countryside and the bones of so many were still lying in fertile fields? These were my thoughts, I do not know what others mulled as they walked. I do know however that something special was happening in the solitude. Then just as suddenly and as softly as the breeze that caressed the marchers, we were lifted again into celebration and song. We were The International Red Cross and Red Crescent Societies celebrating our greatest victory together… unflagging compassion, strength in unity and a renewed commitment of the visions put forth by Henri Dunant. As we wound our way back into town we were met by the townspeople with cheers and waving Red Cross banners. Children holding signs for peace brought me to tears. I finished my march weary and speechless. I extinguished my torch and walked the next few steps in darkness, then turning a corner I was met with a giant celebration bursting forth; a band playing and festivities around the campground celebrating the accomplishment of not only the participants but of the societies themselves.

Solferino is a moment to be experienced. It carries you. It pushes you past beliefs and renews hope. It reminds us that we are one Red Cross and that our work around the world holds the promise that together, and only together, can we can be successful when we walk shoulder to shoulder.
Posted by nyredcross at 1:56 PM