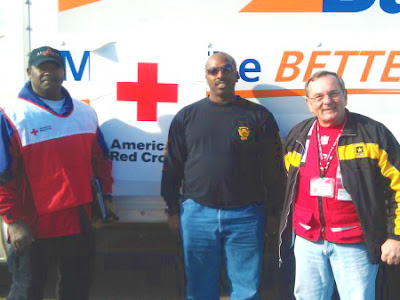 Weekends on the Red Cross Hurricane Sandy relief effort call for an extra push – food and water to stock up on, comfort and clean-up kits to load, and trucks of all shapes and sizes to drive from the warehouses to the Red Cross staging sites.

“Some of our guys get only one day off, and their wives already had jobs lined up for them,” said Rich Caldwell, a Teamster from Milford, Pa., and one of the dozens of Teamsters helping out on the Red Cross Sandy mission. “My wife said, ‘Go on, get out of here!’”

Hurricane Sandy has fomented a unique partnership between the Tri-State Teamsters and the American Red Cross combining the union's logistics expertise with the agency's resources. Teamsters, a group of unionized drivers living and working across the region, prepositioned goods, operated the forklifts, and drove 16-foot box trucks loaded with urgently needed supplies from the New Jersey warehouse to the far-reaching areas devastated by the worst hurricane to hit New York in years.

Out in the field, they also helped identify stricken communities that hadn't been served, helping to identify the need for an emergency shelter in Long Beach, N.Y., and a distribution site at the Brooklyn Cyclones’ parking lot in Coney Island.

In another Teamster effort, a public official called to inform the Red Cross that the Martin Luther King Center in Long Beach, N.Y., needed help. The neighborhood in which it was located was also without power or heat, and the people lacked a hot meal and safe drinking water.

“The Red Cross has an amazing capacity and has been responsive,” said George Miranda, President of Teamsters Joint Council 16. “We have the members in place that can get it to the locals. We’re heading in the right direction. The partnership is working well.”

Laura Hevesi of the Red Cross praised the Teamsters with whom she worked: “Some came out night after night, making the long drive from Jersey City to staging points in far-flung places, ensuring everything people needed would be available the next day.”

Posted by nyredcross at 3:22 PM