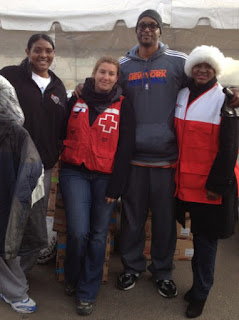 “I like the actual work and meeting such wonderful, sympathetic volunteers – we all connect to support one cause,” reflected Caroline Belina, of Montreal, Canada.

One of many people who have come from Red Cross organizations around the world to join in the Red Cross relief effort in the wake of Superstorm Sandy, Belina is grateful for the support and encouragement her family, home branch, and workplace have given her.

Belina joined her local chapter of the Canadian Red Cross at the urging of her mother, who thought she would be uniquely suited to provide help and comfort to those impacted by Superstorm Sandy. Her branch agreed and arranged for her to deploy.

The school system where she teaches agreed to grant her leave without pay, and her teacher’s union stepped in to cover her salary while she was absent from the classroom.

“Everyone thinks this will set a good example for the kids,” Belina said of the support she has received.

Working at a Red Cross distribution site in the Rockaways in Queens, N.Y., she was glad to be a part of the massive relief effort, which has involved more than 15,000 disaster workers in the several states impacted by the storm.

Email ThisBlogThis!Share to TwitterShare to FacebookShare to Pinterest
Labels: Across the County, Diaster Relief, Down the Street, Hurricane Sandy