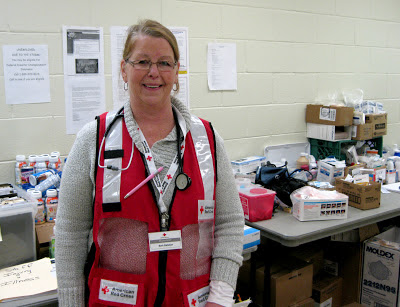 When Barb Bakalyar, a Board member from the American Red Cross Southwest Minnesota chapter, and her daughter, Sarah Pohlman, trained together to become Red Cross volunteers, they were looking for a change of pace – and a change of scenery.

They had no idea that months later, the Greater New York Red Cross would tap them to help with the largest Red Cross disaster relief operation in the last five years.

When she got the call, Bakalyar wasn’t sure Pohlman, a busy social worker, would agree to deploy to the Hurricane Sandy operation in New York. But Bakalyar had a special trick. “I didn’t give her enough time to say no,” she said from the nursing triage room at the Red Cross shelter at Long Island’s Nassau Community College.

Since she arrived in New York last week, Bakalyar has been working for the nursing team at Nassau Community College, where the Red Cross has set up an emergency health clinic. Pohlman has been in the serving as a client case worker at Sandy Relief Operation headquarters in Manhattan. Both Bakalyar and Pohlman took time off from their full-time jobs in Minnesota to offer their professional expertise in the wake of the devastating storm.

Bakalyar and Pohlman each have skills critical to the recovery response. Since Sandy hit, the Red Cross has provided more than 89,000 health service and emotional support contacts for people who have been living in the toughest of conditions.

Right now, nearly 3,000 Red Cross workers are supporting shelters, providing food and water at fixed sites, as well as driving through neighborhoods to distribute meals and supplies. About 90 percent of these workers are volunteers from all over the country. To date, the Red Cross has mobilized more than 14,800 trained workers to help people affected by Sandy across 10 states, the District of Columbia and Puerto Rico.

Back in Minnesota, Bakalyar works in the nursing industry as a clinical nurse and consultant with Avera. She said that employer’s corporate philosophy of caring for others made it easy to get approval for the spontaneous trip to New York.

Since the American Red Cross’s founding on the Civil War battlefields, nursing care has been a priority of the organization. Bakalyar believes most nurses have a caring, compassionate personality, which ideally suits them for Red Cross service.

“When you’re in the caregiving field, it just feels right,” Bakalyar said about nurses working with the Red Cross. “It feels like what I’m supposed to do.”

Email ThisBlogThis!Share to TwitterShare to FacebookShare to Pinterest
Labels: Across the County, Disaster Response, Down the Street, Hurricane Sandy, Long Island