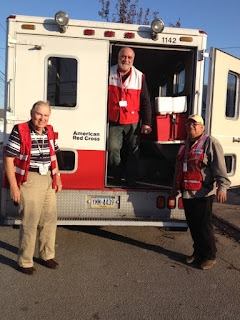 Daniel Lozano (far right) had finished his tour of duty.

After working for the Red Cross Hurricane Sandy relief for two weeks, wading through two feet of water in New Jersey, stocking the warehouse and serving hot meals and whatever the Red Cross Emergency Response Vehicles (ERVs) could hold, he flew back to San Antonio to resume his life. Then the memories of the people in need started to nag him; then his feeling toward Red Cross service began to call; then the next thing he knew, he was on a plane back to New York.

On Thanksgiving Day, Lozano was on a crew distributing hundreds of meals to people rebuilding their homes – and their lives – in Island Park, Long Island. Now on his second deployment, he has been out on another ERV handing out more relief supplies, seeing new faces and overcoming new challenges in the fifth week of the Red Cross Hurricane Sandy relief effort.

"I was a client from Hurricane Charlie. Before that, I had no idea about the Red Cross,” said Lozano. “In fact, I was one of those people who wouldn't even give to the United Way because some of that money went to the Red Cross. I was still mad about having to pay for coffee when I was in the military and came home from overseas in 1957 – 1958.

“Look at me now! I drive an ERV. This is my second time out on Hurricane Sandy. I've been in Tinton Falls, NJ, and Pennsylvania, and now back in New York.

“I love it.... Not the circumstances that bring me here. It's hard what people are going through. But I love this work and the Red Cross."

Photo: The team of Red Cross ERV truck 1142, Alan Herdle, Bart Bardaluccio, and Daniel Lozano in Island Park, N.Y., Thanksgiving Day. The trio distributed 250 Thanksgiving dinners and other necessities to residents across the neighborhood, which is slowly recovering from the effects of Superstorm Sandy.
Posted by nyredcross at 10:39 AM

Email ThisBlogThis!Share to TwitterShare to FacebookShare to Pinterest
Labels: Across the County, Down the Street, Hurricane Sandy