"I believe in the Red Cross; everything we do is driven by the heart.”

Joyce Morse began her Red Cross volunteer career in 1996 when she and her husband, Matt, Chief Warrant Officer W04, and Associate USMA Band Master, were stationed at Camp Zama in Japan. Starting as a General Support volunteer, Joyce became involved in emergency communications, then trained to become a CPR, First Aid, and Babysitter’s Training Instructor. Ultimately she served as the Red Cross Station Chairperson, overseeing all the other volunteer positions. 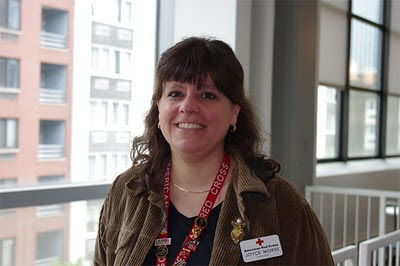 She continued her Red Cross service while Matt was stationed at Norfolk Naval Base in Virginia; Fort Stewart, GA; Wiesbaden, Germany; and Fort Jackson, NC, volunteering at all these locations as Blood Services Chairperson; teaching CPR and First Aid; and/or working in Red Cross Emergency Communications. Additionally, she participated in a study for the reorganization of the Emergency Communications Center at the Central South Carolina–Columbia Chapter of the American Red Cross.

In recognition of her service Joyce received the Red Cross Exceptional Volunteer Award while stationed in both Japan and Germany, and the Clara Barton Meritorious Leadership Award from the Central South Carolina–Columbia Chapter of the American Red Cross.

In 2007, Joyce and her family, which now included children, Anthony and Jessica, moved to West Point. There she serves as a member of the NY Red Cross West Point Leadership committee; helps to coordinate volunteer staffing at all the West Point blood drives, at which she also works and oversees volunteers; teaches Red Cross Volunteer Orientation and Health and Safety Classes; and provides general administrative support.

At West Point, Joyce gives her time to her children’s schools, volunteering in the classroom and the school nurse’s office, and helping to run book fairs. She also volunteers at the Most Holy Trinity Chapel, where she is a Eucharistic Minister; helps with the Little Flowers Girls Club and with the altar servers; and helps with her son’s baseball team.

Joyce says, “Volunteering for past 14 years has been a wonderful experience. I’ve worked all over the world, and the people are great. That’s one reason I’ve stayed as long as I have. I believe in the Red Cross; everything we do is driven by the heart.”


Joyce Morse from West Point, NY is the recipient of the 2010 Jean MacArthur Volunteer of the Year Award
Posted by nyredcross at 12:17 PM

Email ThisBlogThis!Share to TwitterShare to FacebookShare to Pinterest
Labels: Across the Country, Around the World, Down the Street, Volunteer