Military wives lead famously peripatetic lives—moving from base to base as their husbands’ assignments change. Joan Finnegan is a perfect example, having set up house in many places since she married her husband, Patrick. And it is the qualities for which she is being recognized—extraordinary kindness, optimism and cheerfulness—that surely moved with her from Massachusetts to Washington, Virginia (several times), Kentucky, North Carolina, Florida, Germany (twice) and then here to West Point. Joan is the recipient of the Harriet Demarest Congeniality Award which recognizes a Red Cross volunteer who has served the West Point community with exactly those sterling personality traits. 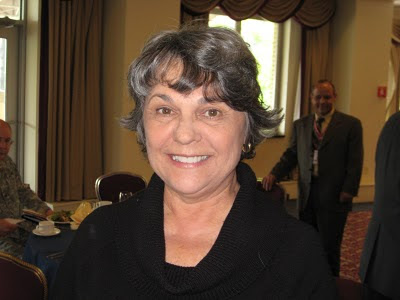 Joan, who hails from Long Island, has been volunteering with the Red Cross since her high school days when she worked as a candy striper at Nassau Hospital in Mineola. And while studying nursing in Syracuse she worked as a Red Cross blood-drive volunteer.

She married Patrick Finnegan upon his graduation from the United States Military Academy in 1971, and the couple moved to Massachusetts where Patrick attended Harvard’s Kennedy School of Government. Moves to bases in Washington State and Virginia followed. From an assignment in Warrenton, Virginia they traveled to Charlottesville where Patrick obtained a law degree from the University of Virginia. It was here that Joan reconnected with the Red Cross, developing and teaching childbirth classes at the UVA Hospital where she also worked as a part-time labor and delivery nurse.

Next it was off to Germany where Joan continued to teach childbirth classes as a Red Cross volunteer. Three years later the family was back in Charlottesville where Joan resumed teaching childbirth classes and worked full-time as a nurse. Then it was off to Fort Bragg, North Carolina and, after that, back to Germany where Joan worked as a quality-assurance volunteer in the US Army Health Clinic in Stuttgart under the auspices of the Red Cross. In 1998, upon Patrick’s appointment as head of the Academy’s Department of Law, the couple settled at West Point, where Joan has worked since her arrival as a Blood Drive volunteer, including six years as Blood Drive Captain. In 2004, she was awarded the NY Red Cross Jean MacArthur Volunteer of the Year Award.

Additionally, since her arrival at West Point, Joan has served as a Red Cross volunteer at the Keller Army Hospital’s front desk. Where better to put her famous congeniality on display?

"Whenever we moved as an Army family, after the boxes were unpacked and the children were in school, the first place I'd go was to the local Red Cross office,” said Joan. “That's because I discovered early on that the friendliest and nicest people in the neighborhood (or on post) were Red Cross volunteers. Over many years, Red Cross staff and volunteers always shown great goodness in their daily lives, challenging me to be a better person."

Joan C. Finnegan from West Point, NY is the recipient of the 2010 Harriet Demarest Congeniality Award
Posted by nyredcross at 11:33 AM

Email ThisBlogThis!Share to TwitterShare to FacebookShare to Pinterest
Labels: Across the Country, Around the World, Down the Street