“We are blessed to have a volunteer with Hun-Jue’s compassion, flexibility and mission to serve.” 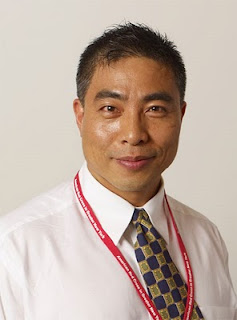 The recipient of the 2010 First Year Award is Hun-Jue Luu, honored as an exceptional volunteer who has served for less than one year. A practicing psychologist who wrote his dissertation on trauma caused by airplane crashes, Hun-Ju has made an outstanding contribution as a disaster mental-health volunteer.

He is also a translator and mediator. Hun-Ju completed the NY Red Cross’s newly offered one-day Disaster Mental Health Institute training in February 2009. Not long after, he was tapped by NY Red Cross Director of Mental Health & Service Programs Diane Ryan to go to JFK airport with a small team of Red Cross volunteers to meet Mandarin-speaking families arriving from China. The families flew to the US to identify loved ones who had been killed when a gunman opened fire at the American Civic Association in Binghamton, New York in April 2009.

The arriving families were exhausted, stunned and grieving. Hun-Jue greeted them in Mandarin, offered condolences from the Red Cross and provided support and crisis intervention. He explained how they were to be taken to Binghamton and prepared them for what to expect upon arrival there. He took special charge of the brother of a woman who had been killed, comforting him, shielding him from the media and getting him safely on the way to Binghamton together with relatives from Long Island. “Building trust is the first giant step in establishing a relationship with clients, and understanding both the culture and the language is essential to making this happen,” said Hun-Jue. “Grieving families, especially Chinese ones, don’t want to talk to strangers. But once they understand what the Red Cross is trying to do for them, they are very grateful.”

Just eight weeks later, at the beginning of June, Air France Flight 447 crashed off the coast of Brazil en route from Rio de Janeiro to Paris. The airline called the Red Cross to ask for assistance in notifying a Mandarin-speaking family whose only son had been on the flight. The victim’s parents had lived in New York City for 18 years and were getting ready to move permanently to Brazil to join their son, who had opened a business there. Hun-Jue provided essential translation services for the Air France personnel and offered culturally sensitive guidance and support to the family as they dealt with Air France liaisons and the Office of the Medical Examiner. For many months he remained available to the family, who came to trust him and did not wish a referral for ongoing counseling. Hun-Jue was able, over time, to help this family accept the fact of their loss and begin to make decisions about their future.

“Throughout all of this, Hun-Jue demonstrated an amazing ability to meet the clinical needs of this distraught family, the needs of the staff of Air France, and to work within the parameters of the mission of the American Red Cross—this after knowing us for just a few months,” said Diane Ryan. “It was an honor to work with Hun-Jue on the Binghamton disaster and the Air France aviation incident. The NY Red Cross is blessed to have a volunteer with his compassion, flexibility and mission to serve.”

While Hun-Jue recognizes that he possesses a particular set of skills he can call on when the trauma of a disaster is compounded by an inability to communicate in English, he says, “Mental-health skills are not always the most important thing. No matter who you are, if your heart is in the right place, people will appreciate what you’re doing.”

Hun-Jue Luu from Kew Gardens is the recipient of the 2010 First Year Award
Posted by nyredcross at 1:57 PM