“This was very meaningful and I felt I could bring something to it.” 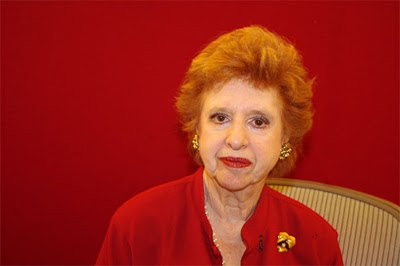 Françoise Max came to the NY Red Cross in 2001 as a Holocaust Tracing Services client. Appreciative of the help she received, in 2007 she began volunteering in International Services at the NY Chapter to help those who have experienced similar losses and/or disconnects.

Between September 1939 and the summer of 1943 Françoise Max, an only child, and her parents, French Jews who made their home in Paris, escaped the Nazis by living first in Cannes, France, and in 1943, by hiding out in the tiny French hamlet of Callian. Françoise and her parents returned to Paris in 1945 to take up their lives again, but the rest of her family—her parents’ siblings, her paternal grandfather and maternal grandmother—were not so lucky. Most of them had been living in Krakow, Poland, or in Podgorze, a suburb of Krakow, when Françoise and her parents lost track of them during the war.

The fate of many of her relatives was still a mystery when, in 1952, Françoise, who was then 20 years old, and her parents immigrated to New York City and settled in Manhattan. Françoise soon married and moved to Forest Hills, Queens, and later Great Neck, Long Island, and gave birth to two daughters. When her marriage broke up in 1974, Françoise relocated to the Upper East Side of Manhattan, where she still resides. She held jobs in the toy industry, and then at the cosmetics company, L’Oreal, where she started as a secretary and rose to become Director of Public Relations.

Sometime in 2001, Françoise learned about Red Cross International Tracing Services and came to Greater NY Chapter headquarters in Manhattan, seeking to learn the fate of four of her father’s five sisters and their families, as well as of her maternal grandmother and uncle. Françoise had little information about her family to share with the NY Red Cross Tracing Services caseworkers. She knew that before the war, three of her father’s five sisters had been living in Poland, and one in Paris. She also knew that the fifth sister and her daughter, both of whom survived the war, had been deported to Russia, along with the sister’s husband, who was later killed in 1940 in the Katyn Forest massacre, a mass murder of Polish nationals carried out by the Soviet secret police. Sadly, she was also aware that her father’s only brother had been shot in the streets of Krakow, Poland.

In order to move the tracing process forward, Françoise decided to give “supposed” birthdates for family members, based on what she could remember. Tracing is painstaking work, and many years can pass before a case yields information. Almost four years after submitting her paperwork, Françoise received news from American Red Cross Tracing Services that was “very meaningful” to her. A German questionnaire from 1940, used to determine who should be sent to concentration camps, had been found for her maternal grandmother, Hendla Neugasser, and a paternal aunt, Rive. A copy of the questionnaire, which was in the handwriting of her Grandmother Neugasser and Aunt Rive, was mailed to Françoise, and gave her dates of birth for the two women, as well as for Rive’s daughter, Tosha, and for her mother’s brother, Izak. Françoise sent this new information to the Holocaust Museum in Washington, D.C., hoping their researchers would be able to discover even more.

By the beginning of 2007, however, she had not heard anything from the museum. It was then that she came to the Chapter to meet with the International Services staff about another paternal aunt, Hela Samuel, who had been living in Paris. Judy Stieglitz, the NY Red Cross tracing services volunteer working on Françoise’s case, believed that Françoise would be an ideal fit as a caseworker and suggested that she come aboard. Françoise readily agreed. “I was looking for volunteer work,” she said. “This was very meaningful and I felt I could bring something to it.” In 2009, she received the Greater NY Chapter’s International Humanitarian Service award, given to a volunteer “whose international work exemplifies or inspires the humanitarian values of human dignity, respect, compassion and the protection and assistance implied in the Fundamental Principles of the International Red Cross and Red Crescent Movement.”

After almost a decade of searching for answers, in January, 2010, out of the blue, Françoise received an e-mail from the Holocaust Museum in Washington, D.C. Attached was a 1940 photo of a girl of about age 18, in Poland’s Krakow ghetto. Françoise recognized the girl as her cousin Tosha. Although gratified that the photo had been found, Françoise wished they had also found a record of Tosha’s death, or any further information.

However, Françoise derived some comfort from the photo., and was gratified to know that as a volunteer with NY Red Cross International Tracing Services she is able to bring the same feeling of closure to others around the world—including Australia, Indonesia, the Congo, and other countries—by helping them to learn the fate of or to reconnect with loved ones separated or lost by war or natural disaster. “I am glad to be associated with the Red Cross,” she said.

Françoise Max from the Upper East Side of Manhattan
Posted by nyredcross at 11:17 AM

Email ThisBlogThis!Share to TwitterShare to FacebookShare to Pinterest
Labels: Around the World, Down the Street, Volunteer