A Sandy Volunteer Shares His Experiences 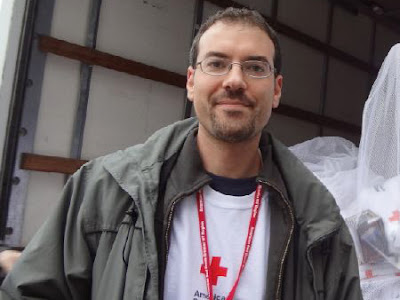 Michael Spieth, who lives in Astoria, N.Y. and works as a project manager, became an American Red Cross spontaneous volunteer for Sandy and worked for 72 hours in a Red Cross shelter on Long Island. He wrote a description of his experience that he sent to friends. He gave us permission to share it here.

Some of you know that I volunteered at a Red Cross shelter on Long Island as part of the disaster relief efforts after Hurricane Sandy. I'd like to share some of these experiences.

I'm very glad I did this. I'm back home after almost three days, having taken the Long Island Rail Road to the Jamaica station and the subway home from there.

You would hardly believe the pace of work at a Red Cross shelter. Every moment is taken up by thinking and acting on a never-ending list of items. I got to sleep three hours twice in that time. I could have gotten more, but one goes into a kind of adrenaline rush and mostly only sleeps when talked into it a few times.

I was made aware of the need for volunteers by a friend. I signed up on Tuesday, Oct. 30, and showed up for training on Wednesday morning ready and packed for three days, as the email had asked. That same afternoon, I was in a van with four others, being driven out to Long Island. I was assigned to a shelter located by Farmingdale, N.Y., in a high school. My first night there, it received 100 people from another shelter closer to the water, which had closed due to lack of electricity. That brought us to about 230 shelter residents total.

The Red Cross had prepositioned a storage container with supplies the Sunday before. The shelter staff took cots, blankets, and many other useful items from there. Parents and community residents also walked in with bags full of donations: clothes, diapers, soap, toiletries. We had boxes of toiletry kits prepared by a Girl Scout troop, and food was often donated from businesses nearby. I expected the shelter would have to close on Sunday to make room for school starting again Monday; they did not know where they'd be transferred to when I left. (Update: The shelter did not move that weekend; on a disaster relief effort, things change all the time.)

One senior lady was there because she needed electricity for her medical device (oxygen, in her case). I was glad to see that she was picked up before I left. There were about five babies and 25 children; the rest were adults. The children stayed with their parents in a separate school gymnasium next to another gymnasium housing adults only.

One of our goals was to create routines, so everyone had some structure to their time in the shelter. If they needed something and we had it, it was theirs.

Volunteers ran the entire site. Our managers were professionals with years of experience in emergency and disaster relief management, and the volunteers all did what they were best at.

While training at the Red Cross we were told two indispensable things: first, be flexible; and second, listen to clients; it helps them.

Listening does help. Many times a resident stopped me and told me their story. One could see their relief to share. I'll add another to this list: three—Let people be people. With so many quirky characters under one roof, the only thing one could do is just take them for who they were—people in need of help, who needed a place to sleep, food to eat, and a hot shower. Many of them had literally lost everything to the flooding. Others just couldn't stay at home because of a lack of electricity, and often because they were dependent on medical devices needing electricity, like oxygen machines.

No point in going into detail on some of the bad luck that these folks have had. Needless to say, if one has to go to a shelter, it's serious.

More volunteers from AmeriCorps, Stonybrook University, JetBlue and others arrived on Thursday and brought much needed help to the team.

A bus from the SPCA housing pets arrived Thursday and pet owners got to spend time with their animals. Ambulances and paramedics from Ohio and Alabama stayed at the school 24/7 to provide extra medical coverage, beside the on-site nurse, who was sent home and replaced after 48 hours of straight work. The school's custodians helped us 24 hours a day with facilities, and police officers were there to keep the peace.

The staff and shelter residents started working together very quickly to manage events like helping clean the cafeteria and the entrance areas. Residents also lent each other phone chargers, watched out for each other's children in the “family” gym.

One kid really stood out. He helped like a champion with anything he could. I’ll call him Brian. He celebrated his 16th birthday in that shelter. The school's custodians found out and got him a cake. Red Cross policy is to never abandon people, and the goal really is to get people connected to their relatives and friends, and to get back to their lives.

Ok, I'm exhausted and on my way to a full night's sleep, after a great, warm, homemade dinner. This was an amazing and moving experience, and I thanked the Red Cross for letting me help. Please consider making a small donation at www.redcross.org

Hope you're all well, and thanks for listening.

Posted by nyredcross at 3:09 PM