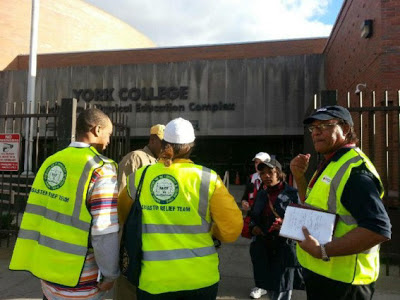 The NAACP Red Cross Disaster Strike Team has been on scene helping survivors of Hurricane Sandy since Nov. 1, 2012. This extraordinary team works in tandem with the Red Cross, helping to feed victims of disasters and to distribute relief items, including Red Cross comfort and cleanup kits.

Team leader Gene Collins revived an agreement between the Red Cross and the NAACP from 1981. Since Collins has taken this agreement under his care the team has expanded to approximately 100 members nationwide. They now deploy wherever the Red Cross deploys. Recently, they were deployed to Louisiana, Florida, Joplin Missouri, and now New York City.

Gene Collins, who is heading up the NYC group, goes ahead of the team and does an assessment of communities and reports the needs back to the Red Cross for action. Another member, George Thomas, said they received a request for 5,000 blankets and some hot meals from one New York community. Because of their outstanding ability to connect with the communities they serve, this “strike team” is extremely effective.

On a recent mission during the current Superstorm Sandy deployment, the team came upon a family who was concerned about their 79-year-old aunt whom they had not heard from since the storm’s impact. She was on the 17th floor of a high rise apartment building. The NAACP and Red Cross volunteers climbed the 17 floors. Leonard Favorite, Gene Collins and James Richardson were able to reach her.

Leonard said, “I knocked on the door and told her ‘I came all the way from Texas to rescue you.’”

He carried her to the ground floor and re-united her with her family.

Leonard said, “There were many tears of joy shed when she was reunited with her family.”

Posted by nyredcross at 4:29 PM

Email ThisBlogThis!Share to TwitterShare to FacebookShare to Pinterest
Labels: Disaster relief, Down the Street, Hurricane Sandy