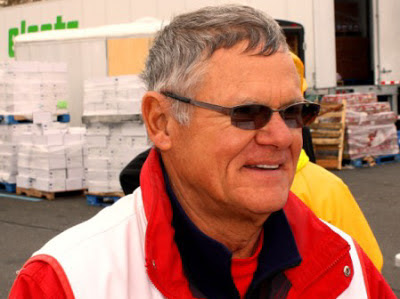 Jim Kuhlmann is the manager of the American Red Cross Kitchen No. 1, operating in the Home Depot parking lot on Staten Island, but that doesn’t mean he spends his days slaving over a hot stove. Jim is in charge of getting meals prepared, loaded onto Red Cross Emergency Response Vehicles (ERVs) and sent out each day to the thousands of people rebuilding their lives from the devastation of Superstorm Sandy.

When an ERV arrives in any given neighborhood, many people line up to get hot meals, snacks and water. At times, people are reduced to tears when handed their hot meals and they thank the Red Cross volunteers for helping them.

It’s this kind of scene that makes Jim feel like he is really in the people helping business.

“The whole purpose of this is to serve the client,” said the Wichita resident, now on his 12th Red Cross deployment. His first deployment was as an ERV driver after Katrina.

Those working with Jim praise his quiet, deliberate manner in running the operations which includes loading some two dozen ERVs with 8,000 to 10,000 lunches and dinners each day for delivery to those in need.

As the ERVs line up to receive supplies at the various pallets, Jim watches as the vehicles move in and out of the area and is satisfied with what he sees. The goal is to have all of them loaded and on their way within an hour.

Near the large trailers parked with various items destined for distribution is the area where the food is cooked by members of the Southern Baptist disaster relief volunteers.

Jim’s boss is Steve Ade, of Salina, Kansas, the mass care (feeding) chief who oversees four kitchen operations, including the one on Staten Island.

Steve said, “He runs it like a sewing machine. Any Red Cross disaster response I’m on, I want Jim running the kitchen.”
Posted by nyredcross at 1:51 PM

Email ThisBlogThis!Share to TwitterShare to FacebookShare to Pinterest
Labels: Across the Country, Disaster relief, Down the Street, Hurricane Sandy