I spent my birthday in New York 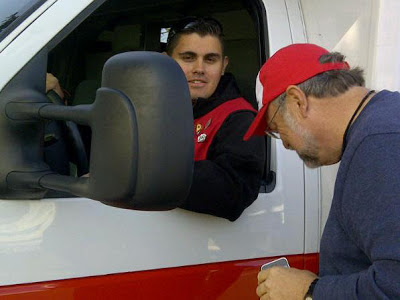 Michael Clark spent his 22nd birthday giving rather than receiving.

An American Red Cross volunteer from Eureka, Calif., Clark came all the way across the country to help deliver meals to people impacted by Superstorm Sandy.

Every day—including his birthday, Nov. 11—he would show up first thing in the morning at a field kitchen in Deer Park, N.Y., to load the insulated containers that hold hot food prepared by members of the Southern Baptist Convention.

With directions from his Red Cross dispatcher, he and his crew would head for a stricken Long Island neighborhood, where the familiar red and white truck would deliver food and hope to those trying to put their lives back together.

Back home, Clark works for a Walmart store. When he learned that the Red Cross needed feeding truck drivers, he approached his store manager, who “made it happen” to let Clark go to New York to help others.

Clark prides himself in delivering not only meals, but a laugh to residents in need and co-workers alike.

Posted by nyredcross at 3:21 PM

Email ThisBlogThis!Share to TwitterShare to FacebookShare to Pinterest
Labels: Across the Country, Disaster relief, Down the Street, Hurricane Sandy, Long Island