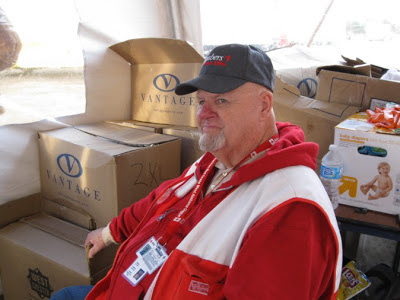 “Volunteering for the Red Cross is just like a second love in my life,” said John Saffa.

The 73-year-old from the American Red Cross Cherokee Chapter in Alabama has been in the organization only a year, but Hurricane Sandy is his fifth national deployment.

Tuesday, Saffa was helping with bulk distribution on Staten Island, providing clean-up supplies and coolers packed with Thanksgiving treats to people without power.

“I like being out with the people,” Saffa said. “They come up and hug you and thank you for being here and missing Thanksgiving with your own family. I feel real honored to be here to do this.”

A friend who volunteered during 9/11 encouraged Saffa to join the Red Cross. When he finally did, Saffa quickly found his place. Between national deployments, he’s made time to complete 27 Red Cross classes.

“The way people in the Red Cross work together is great,” Saffa said. “Everyone I’ve been with on this deployment has been fabulous.”

One person whom Saffa served barely escaped the storm with his life. Fifteen feet of water entered his home and caused his car to flip over. When the water in the house reached the man’s neck, he finally swam out of the house, praying all the way.

“That’s why I give 120 percent,” said Saffa. “I’m out here to help people. The only thing we should be worrying about is the people we’re helping.”

Resting briefly after making his second run for the day, Saffa added, “I’m going to do this ‘til I can’t do it anymore.”

Email ThisBlogThis!Share to TwitterShare to FacebookShare to Pinterest
Labels: Across the Country, Disaster relief, Down the Street, Hurricane Sandy